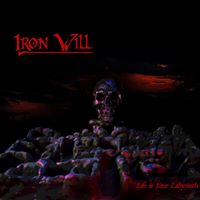 For those of you not familiar with the heavy metal sounds of IRON WILL, we present to you their latest offering "Life is your Labyrinth". And yes it took 18 years to complete.Rivaling the mighty Guns And Roses in album downtime. That being said you will not find a more metal dedicated character as Tony. From videos on their face book page it is clear that he lives and breathes heavy metal. I hear a lot of old school metal influences with IRON WILL. They are like a cross between ANVIL and early IRON MAIDEN with Paul Dianno. The music just has this old school headbanging feel to it. There is a lot of heart and soul burned into their collective sound.

Can you give us a brief history of the band?

Al - My brother Eli were channel surfing on a Saturday morning back in 1997, I think, and we just happened to catch Tony on public access TV singing with his old band, Scorched Earth. Since they were the only other guys around we had heard of that were trying to making traditional heavy metal in the Boston area at that time, we said to ourselves “We have to get a show with these guys!” We contacted the band through the email address they put on the screen and we got them on one of our earliest Ravage shows in Boston. From the first time we met Tony it was like we had known him all of our lives. He is a kind of everyman who gets along with everyone. After Scorched Earth broke up, around 1999, Eli got in touch with Tony and they started writing songs and Iron Will was born. We’ve been around off and on ever since writing songs and playing shows, but we never got around to properly recording Tony’s concept album until now… How is the local scene in your area?
Tony - Getting stronger… more musicians… seemingly more bands.
Al- Ya lots of good new bands springing up. It’s a lot better than 1999 when everyone was into rap-metal shit.

How would you describe your live show?

Tony - Full of energy. We give the audience all we’ve got! Their money’s worth (we hope)! It’s even spiritual at times…during certain songs. Our live show will expand to more visuals in the future. For now it’s more just raw energy and though provoking lyrical delivery! We’re trying to be thinking-man’s metal!

Take us through the writing process for your last album
Al - Tony would usually bring his concept lyrics to practice and Eli would just start playing a riff on the guitar and we would jam them out and form songs on the spot… then play them for 17 years before actually recording them.(He is serious on that..wolf note)
A couple of the songs came from demos, but most were jammed out in a few minutes and practice and then molded to Tony’s lyrics. There is one cover song on the album “The Wolf” which was written by Tony’s first band Scapegoat and performed by his band Scorched Earth before he joined Iron Will.
Tony - The concept album is a step by step story about someone trying to survive what I call “The war of life”… trying to figure things out in the maze of life… the album is all about making choices…the right ones (we hope).

Is it difficult to find fresh ideas or easy
Al - Since we haven’t actually recorded anything in the 18 years we’ve been together, we have no shortage of material. But I would say Tony’s energy toward all things metal is always inspiring to the rest of the band. 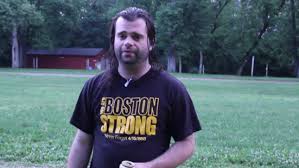 How much time do you spend promoting on social media

Al - we do what we can with our limited resources and small sphere of influence. You can always do more. But Iron WILL go viral and Iron WILL got Platinum! Hooh!

What are the future plans for the band?

Al - Iron WILL go Platinum! Ha. No, we’re just going to play shows wherever and whenever people will let us, have some fun, and hopefully do another recording at some point (that hopefully won’t take another 18 years to write and release!) We are in the process of filming a documentary about Tony’s life and the album which will hopefully see the light of day at some point. It’s called “Tony The Metal Duke: Life Is Your Labyrinth”.

what are your main influences?

Al - As a drummer, I just try to imitate and rip off Nicko McBrain and Lars Ulrich as much as I can.      Tony - Bruce Dickinson… Iron Maiden… Judas Priest… Slayer… Metallica…Anthrax


what are your rehearsals like? Do you have a structured set list of is it just a jam?

Al - when we were first writing the album we would jam new songs all the time. Now that the album is done and we are playing shows we usually just play through the whole album a couple of times as we drink beers and Tony tells hilarious anecdotes about his day at work.

One band you would love to open for or tour with?


Lastly, anything you would like to say to the fans?

Al - Check out the album “Life is Your Labyrinth” available now on Amazon and soon on iTunes etc. Join us at www.Face book.com/TheIronWill   support Tony The Metal Duke and true train metal! Iron WILL Rise! Hooh!