Showing posts from November, 2016
Show all

"I Would Love to record with Led Zeppelin"
One of the most iconic rock and roll drummers in the world. Carmine Appice has played with Rod Stewart, Pink Floyd, Blue Murder, King Kobra, Vanilla fudge, Cactus, to name a select few. His passion for music and his art is unparalleled.I had the chance to listen to the entire Cactus catalog( now available on Rocker Records), and the music is a solid representation of superior musicianship. So many bands have been influenced by these players.Creem magazine once called Cactus, "The American Led Zeppelin", and now I know why. They are simply some of the most creative and capable rock musicians to ever record.
When we talked he was really excited to continue his musical projects which included, among others, Legacy x ( a band close to Blue Murder with Joe lYnn Turner on vocals), and Cactus. He was also enthusiastic about his new label, Rocker Records

I had the unique pleasure of interviewing keyboardist extraordinaire, Christopher Bowes from GloryHammer and Alestorm fame. His keen insight into the state of Pirate metal, Theatrics, and all things metal in general was eye opening.We touched on a lot of topics in our brief phone call.

First let me say that Gloryhammer is a very well produced catchy album. What is the percentage of writing that you do versus everyone else in the band?
"Everyone writes. I write about 75% of the music. I let the guitarist make the riffs. I know what a power chord is but that is about it as far as guitar goes. "
So you allow each musician to input what he can.
" It's not an ego driven solo project where I can show off my keyboard skills. The music comes first."
How do you approach a new tour?
"I try to do very little. Try to forget about until the night before the tour starts. Then I just shove a couple of socks and pants …
Post a Comment
Read more

- November 24, 2016
HAPPY THANKSGIVING FROM ALL AT THE CRY OF THE WOLF METAL BLOG!
We just want to thank all of the supporters of this blog as well as hard rock and heavy metal fans around the world.
Looks like we might be formulating a top ten albums for 2016 this year.
Look for more live interviews in 2017
Post a Comment
Read more

- November 15, 2016
. Give us a history of Shotgun Trust.
Founding members Todd Pierce/Lead guitarist, Shawn Lajeunesse/Drums, and myself Jeff Craig/ Guitarist, Lead Vocalist started this band over 20 years ago with the intent of have a great time and hopefully in the process write some original music that people would enjoy.

2. Who writes the material?
Our lead guitarist and myself usually provide the initial composition and then allow the other members to add their pieces to complete the musical arrangement.

3. Which bands have influenced you the most?
Iron Maiden, Dio, Judas Priest, Van Halen, Scorpions


5. How active is your band with social media?
We try to keep our fans abreast on our upcom
Post a Comment
Read more 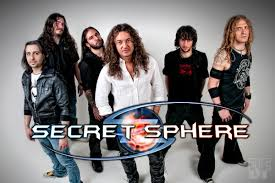 Secret Sphere are without a doubt one of the most well known metal bands in Japan, with a solid fan base there since their inception in 1997. All their albums have been released in Japan and in fact, it is the only country where you can find Secret Sphere’s very rare, original debut demo tape, officially released as a special edition item there! That says a lot about the respect and affection that the fans in the Land of the Rising Sun have for Aldo LoNobile’s band!

During the band’s last Japanese tour, in support of the Special Anniversary Edition of the band’s signature album “A Time Never Come”, Secret Sphere had the chance to record their show in Tokyo in its entirety, which included all the band’s major hits: “Legend”, “Under The Flag Of Mary Read,” plus the melodic metal gems taken from the latest album “Portrait Of A Dying Heart". Featuring vocalist extraordinaire Michele Luppi (now also keyboard player w…
Post a Comment
Read more