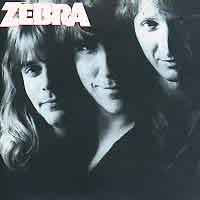 A Power Trio Blast From The Past

At the tender age of 15 in the year 1983 I discovered a little band called Zebra. At the time I based my band preference on album covers and band names. So Zebra with their closeup band face shot on the cover and the weird Sesame Street like name should never have crossed my radar. But for their songs I would have passed them by. The opening lines of "Tell Me What You Want" pull you in and then hit you over the head when the song kicks in. Brilliant musicianship and powerhouse vocals. "Who's Behind The door?" is one of the best songs on the album their career. It is rivaled only by "Bears" off the "No Tellin Lies" album.

Following the debut, they released No Tellin Lies, 3.V, Live, The best of Zebra in Black AndWhite., King biscuit Flower Hour-Zebra, and IV  as well as a solo album by Randy Jackson and Felix Hannemann.