Interview with Scott Ian Of Anthrax/I'm The Man book review


I'm The Man  The Story Of That Guy from Anthrax


Scott  Ian of Anthrax was high on my list of people to one day interview. So when the opportunity came to review his new Book, "I'm The Man", I jumped at the bonus chance to interview the man himself. Truly responsible for being a forerunner in the American Thrash Metal Movement, Scott and Anthrax are in the Pantheon of metal icons. His music is inspirational for so many bands, his guitar sledgehammer sound is a like a juggernaut of pure molten metal. He is onstage a force to be reckoned with. But I found the book and the man himself to be sincere, down to Earth, and honest. The history of Anthrax is interwoven with tales of hard partying, and dreams when metal was still in its true infancy. This book presents the reader with a drone like view of the rough road to success. The book is one wild ride throughout his life and you feel drawn to the persistence of once consistent theme in the pages: Scott loves what he does. 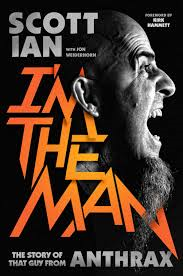 First of all congrats, on the book.


I like the flow of the book it is not all about booze and drugs and broads.


(Laughs) Well I look at it this way, even if that was my life. If my life was that I wouldn't have done a book unless I felt I did something different than what has been done a hundred times already. There are so many of those same books out already. So for me ,unless somehow my booze and drugs and women story was so much greater than someone else. But they all tend to blur a little to me. That was the thing going into this. I did not want to do a book just for the sake of doing a book.

Do you find that others in the industry have a difficult time continuing once they become parents?


Yeah, absolutely. Obviously, if you're a parent that enjoys being a parent. Makes touring for a long time very difficult. Three of us in the band have children so you know we just find ways to make it as painless as possible. So everyone doesn't have to be away for too long from their families.

Being a dad, and a husband. How has your perspective on the world changed or has it?


Well it makes things in life simpler. Because family comes first. Everything else would stop If I needed it to. Just makes things a lot easier in one way. Easier to focus on family.

Would you want your son to grow up to be a musician?


How much do you feel the industry for metal has changed with the advent of social media?


I don't know. I don't know what effect it truly has.  Whatever it does it doesn't make up for people stealing records.  I have a twitter account. What is the end game? I don't see the positive of getting your music out there for free. For me making a record used to be special. Getting signed by people ,who understood bands and understood talent development. Making a cd was not something everyone could do. And there is a reason for that. There are not going to be 5 million great bands. But if you go online there are 5 million things to listen to. I think it just creates clutter and confusion truthfully. I don't think anyone will discover the next Metallica or Zeppelin because someone uploaded their songs to the internet. I hate to sound like a crabby old man but nothing makes up for the fact that music is stolen all day long.


Do you come across new bands that interest you?


I am not actively out there looking. I have friends that send me stuff. They get every metal record that comes out in the hopes that they are going to be pleasantly surprised.  Once in awhile someone plays me something that I might like. But I already have 48,000 songs on my iPod to choose from. There is a band called Rival Sons, not a metal band. I really get into. very derivative of zeppelin and the 70's


In the book you did mention at one point the guys in Metallica were considering replacing Lars. Was that some sort of drunken bravado or a serious tone? I mean you were there so your perspective is key.


I don't think it was drunken bravado. It was something they were definitely talking about at that time. 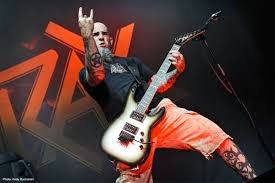 How cool was it to jam with Peter Chris and Ace Frehley at the Eddie Trunk anniversary show?


Yeah. It was great. To get to play some of those songs with those dudes it was really a special moment. I had played with Ace a few times before but I never jammed with Peter. And certainly not together so it was definitely a trip. It sometimes hard to wrap your head around things like that. To go back to being a kid and remembering how into Kiss I was and then to think that I would someday be jamming with them. It blows my mind.


The new Anthrax is in the works?


Yeah we have just been writing and will continue to write until we feel we are ready. We have a lot of really good material. Just keep going until we are ready. Somehow we just know.

With the conclusion of the interview I shut off my phone and concentrated on his every word. Here was a true master of the metal  lifestyle. From the early days struggling to get a record deal to the globe trekking superstar, Scott Ian has remained loyal to himself, his band, and his art form. Pick up a copy of "I'm The man" today and read it for yourself.