Hellspeak
The Slaughter Rule Of Agony 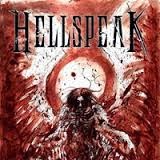 Normally when I listen to a new album to review I sit back and let the computer speakers handle it. For this particular release I thought it would be best to get in my car and drive. The music exploded from my car speakers and it was good and it was loud and it is metal. Hellspeak delivers on a scale that should propel them to a national  spotlight. Hellspeak has recorded one of the best metal albums I have heard from a local artist. The mastermind behind this molten metal masterpiece is Marc Lopes. Truly he is a fan of metal as well as a performer extraordinaire. From his social media postings  to his other metal side projects which include a vocal slot in the band Meliah Rage, Marc Lopes is metal. Hands down. And once again a New England Metal tone to the over all recording.That certain tone that only bands from the East Coast seem to be able to capture.

The control and the passion in his voice is clearly defined on such songs as....."The Slaughter rule of Agony", and "Killing Angels With Silence". "My Annihilation" is one kick ass metal song. The vocal heights on this one are incredible. A heavy metal Olympics of triathlon vocal runs, scorching guitar leads, battering ram drums and thunderous bass. Matt Leff is one amazing and gifted guitarist. The passion and control are infectious. He wields his instrument with power, passion, and precision.

The production is over the top. Crisp, clear, and loud. Everything is here,  the lyrics, the music and the insanely off the charts vocals. You owe it to yourself and the honor of the metal Gods to pick this album up. There can be no forgiveness for not owning a copy.

Some of the influences swirling around this disk like wolves to their prey are: Fates Warning, Nevermore, Iron Maiden, Primal Fear, Ripper Owens, Geoff Tate, Bruce Dickinson.

The acoustic song is definitely one of the stand out tracks." Words From A Dying God". Unexpected and filled with emotions. This track is superior song crafting. The lyrics are hauntingly beautiful. I can hear the nevermore and fates warning influence through out this track. I also hear..dare I say it, Saigon Kick?
"Until The light takes us" could stand next to anything Testament has put out lately or even more of the modern metal edge bands. Awesome song with some powerful riffs going through your head on this one.

This album should be played at dangerously loud volumes. It is a road map for any metal fan.The band have created some of the most intense, insanely powerful riffs and songs.
Outside the weather grows colder, the skies darken, and Hellspeak will be there to warm your metal soul or burn it to ashes.