- January 28, 2018
"The world needs less songs about anger and more songs about drinking beer with dragons".

Age Of Embers is a tremendously talented female fronted New England based band. So rare to find a band of this caliber in my own backyard. They took some time to answer a few questions. Enjoy!

Tell us about rehearsals

Right now we rehearse once a week, usually on a weeknight. Practices are in a small apartment, sitting on a couch. We rarely get the chance to practice live, and it’s always with an electric drum kit. Really low-budget. 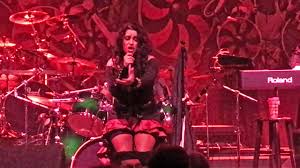 Take us through the writing process? Does everyone contribute?

We usually start with Katrina writing the lyrics and vocal melodies or other parts. Then the rest of the band fills in their parts around her arrangement and song structure. Most of us write our own parts for most of the songs. There are exceptions when someone gets creative, however.

Do you make money at gigs/how do you generate income?

We make pennies at gigs! Most of the money is made through band merchandise. All 5 of us have jobs outside of music that fund Age of Embers.

Who are your influences?

We started out with a vision of being a female-fronted Sonata Arctica, but things have since evolved. We are also influence by Iron Maiden, and lately Unleash the Archers, Dragonforce, Alestorm, and Amon Amarth.

What makes the perfect song for you?

Katrina: My perfect song includes an anthemic intro, strident, belting choruses, with a breakdown that’s gets the heads banging, extreme vox, and a sing along (I love “whoas”). It's important to me to have changing dynamics or I get bored. I like to challenge myself vocally, so in my songs you'll hear the bottom of my range, then ball busting highs, belting, and sweet classical parts. That style is heavily influenced by Tony Kakko of Sonata Arctica. I SO admire what he does with his voice in every song. Tons of fun! 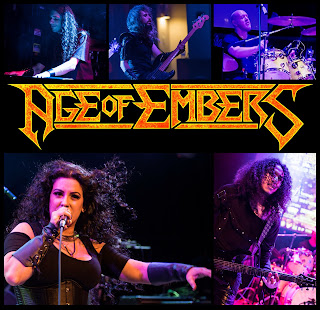 Any subject matter you would not write about?

Katrina: Politics. Nothing could be more boring, negative, or counterproductive. The world needs less songs about anger and more songs about drinking beer with dragons.

Something in you personal music collection fans would not expect?

Katrina: I grew up listening to country music, so I have some Brooks and Dunn in my collection and have seen them live and met them!

Name a band you would love to tour with.

How was opening for leaves eyes?

Sonata Arctica was actually the headliner of that tour, but it was amazing. We had only been performing live for 3 months at the time, so it felt like a great accomplishment. All the other bands were really nice and the staff at The Webster made us feel like superstars.

What has been the most challenging aspect of being a musician?

Definitely the funding of the band. All this stuff add up — logos, merchandise, recording, gas money to shows, gas money to practice, gear, music lessons, the makeup and costumes. We all work hard, but sometimes feel that money is the root of all evil and wish we could do more!

What got you first involved in music?

For Katrina, it was Queen. Singing along with Freddie and realizing she had a decent voice, then trying out for her schools musical theater and getting a lead role on the first try! Brandon also started with Queen, but started playing guitar seriously after discovering Metallica.
Ray got into it with Led Zeppelin. Mike's father was a professional touring keyboard player with a blues band for most of his life, so he passed his knowledge down.

Strangest thing that ever happened at a gig?

We’ve had a drunk sound guy make the keyboard sound like an ice cream truck, and unplug our bassist after the first song! Other than that, the weird stuff usually happens after we’re all drunk (like right now).

Anything you want to say to your fans?

We really just want to thank all our friends for supporting our creative dreams. We’re all about positive energy and not taking this music business so seriously. It's most important to us to meet new people and make strong connections. Let’s all have fun and share our love of music!