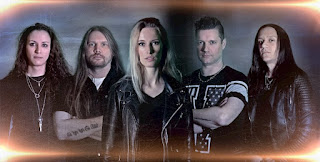 Metalite is certainly a contender on the international female fronted metal band stage. This debut album is very, very impressive. I would dare say they could give Nightwish a run. Powerful vocals that thread the needle between hard rock and power metal. Metalite is a shining star that has all the makings of a super group. Incredible musicianship all around. This is the future of metal!
Check out: "Afterlife", "Power Of Metal"
8/10 Wolf Howls
Cry Of The Wolf Magazine

Short album info: "Heroes In Time" is an impressive debut album filled with melodic and memorable songs, crowned with the strong and emotional vocals by vocalist Emma Bensing as well as a powerful production by Jacob Hansen [Volbeat, Evergrey, Amaranthe]. The artwork was created by Jan Yrlund [Apocalyptica, Leah, Delain].

Heroes In Time album info
Metalite was formed in Stockholm, Sweden in 2015 when Edwin Premberg [guitar] met Emma Bensing [vocals]. He presented his musical ideas and vision to her, and she agreed to join the band. The goal was to write and record melodic and memorable metal songs with a modern and fresh sound.

A deal was signed with the Swedish label Inner Wound Recordings, and the Metalite debut album "Heroes In Time" is scheduled to be released in October 2017.

"Afterlife", the first single from the album showcase the Metalite sound in a perfect way, but other songs from the album like "Nightmare", "Heroes In Time" or "Purpose of Life" are just as likely to become fan favorites.

"Heroes In Time" is an impressive debut album filled with melodic and memorable songs, crowned with the strong and emotional vocals by vocalist Emma Bensing as well as a powerful production by Jacob Hansen. The album should be perfect for fans of bands like Beyond The Black, Dynazty and Amaranthe!