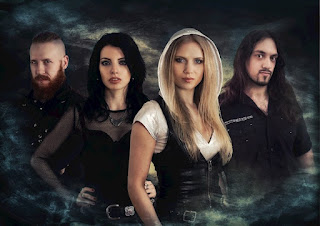 Angel Nation is a must have for any true fan of heavy metal. Their album, " Aeon", featuring the powerhouse vocals of Finnish Elina Siirala, is chock full of impressive power metal and epic heavy metal tunes. The album is a master class in what makes a great metal album. Check out "Burn The witch", "Free", and "Enough is Enough". Elina's scorching vocals compliment this musical juggernaut extremely well. How she is going to find the time to front two major bands(leaves eyes) is beyond me but she pulls this album off flawlessly. This is another band from inner wound recordings to watch in 2018 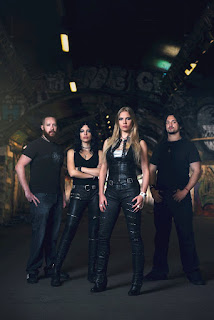 Short album info: Angel Nation, the melodic metal band founded by the classically trained Finnish singer Elina Siirala [also in Leaves' Eyes] are finally back with their second album "Aeon"! The power of metal and rock combined with Elina's ethereal yet strong and emotional vocals create the perfect platform for stories of both earthly and otherworldly she likes to create with her lyrics. The album includes a guest appearance by Jukka Pelkonen [Omnium Gatherum] and the artwoSrk is created by Jan Yrlund [Apocalyptica, Delain, Leah].

Aeon album info
Angel Nation is a melodic metal band founded by the classically trained Finnish singer Elina Siirala who moved to London in 2008 and fell in love with them power of rock and metal.

Their debut album [released under the name EnkeliNation] "Tears of Lust" was received with glowing reviews all over the world. The release in 2014 was followed by shows at Bloodstock Open Air, shows in Finland amongst others.
In 2016 Elina also joined Leaves' Eyes as their new vocalist.

Angel Nation's second album "Aeon" continues the musical diversity that Elina likes to express in her songwriting. The unique blend of retro and modern sounds is developed even further with this album. The power of metal and rock combined with Elina's ethereal yet strong and emotional vocals create the perfect platform for stories of both earthly and otherworldly she likes to create with her lyrics.

Get ready for it all: Heavy, rocking and epic tunes from this highly anticipated album with tons of character!