- May 31, 2017
CRY OF THE WOLF INTERVIEW with John Adams of LOVE-N-WAR
Energy. This band is over loaded with it. Talking to John was a breath of fresh air. His excitement and passion was clearly evident as he talked about his music and his love for music in general. You can tell he eats and breathes rock and roll. 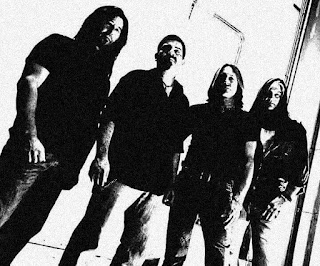 What is going on with Love-N-War?

Well we are working on a new album. About 2/3 of the way done. 3/4 of the rhythm tracks and solos are done.  Recording in Arcadia Falls, Missouri. Our first record, "UP THE ANNIE" was done there. It's a long haul but I think it is worth it. Everything is sounding fantastic so far. This will be a better record. Heavier, more melodic. Should come out by end of August. Planning on a CD release party probably with..and just between you and me...Night Ranger. The new one is called "EDGE OF THE WORLD".


Who writes the songs?
I do. I write everything, and most of the lyrics too. I get an idea and just hit the 8 track recorder.I hear everything. I basically just tell the bass player, "hey follow me" (laughs). Same thing with the drummer. I'm just like play it like this for now and add your own spin later. It all falls into place. That's how we work it out. The new record will be a much better record than the last one.

Any shows coming up?

No shows while we finish recording
But we did just open for Tesla at the house of blues. That was a sold out show. Tesla was watching us from the side of the stage and hanging out. Really great bunch of guys.I would love to play overseas. That is my dream. You can see huge bands playing overseas. They can't sell out shows here but overseas and they line down the streets.I have a good friend in HELSTAR. Over here they can't sell out and over there they are rock Gods. Here he is just a regular guy. Its a trip. We play this area. It takes four and half hours to get to some gigs. We can't hop on a bus cause no one knows who we are. Heavy metal fans don't come out unless it is someone they heard of. 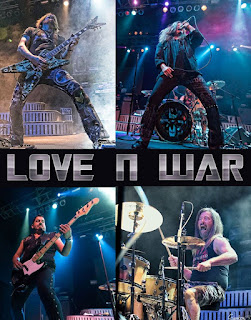 Who are your influences?

Michael Schenker was the reason I picked up the guitar. In fact I have a U.F.O. tribute band called "Lights Out". I am a Michael Schenker freak dude. Joe Perry, Jimmy Page, Ted Nugent.All the big ones back then. Joe Perry was the one for me. The first AEROSMITH tour I saw was ROCKS. They just blew me away.  The band, we are all Rush fans, UFO, same kind of music. 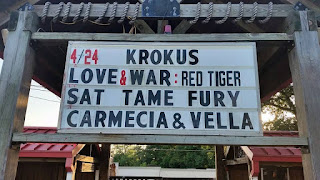 And you have opened for a lot of bands as well

I know a promoter in town so he hooks us with everybody. Y&T, UFO, Night Ranger, Both versions of Queensryche, Sebastian Bach...

How was it working with Bach?

He stayed in his bus until show time. Not a real approachable guy. His guitarist was. He had a few beers with us. Another band that was really cool to talk to was Krokus. Very cool and approachable. We ended up talking music in an alleyway.
Michael Schenker doesn't want to talk to anyone.I went right over to him during sound check and tried to strike up a conversation, but he wasn't interested in talking. Now for $200 you could wait in line and talk to him for ten minutes.(Laughs) He will talk about anything for about ten minutes, take a couple pictures and then move along. But he is wicked bad ass on guitar for me. 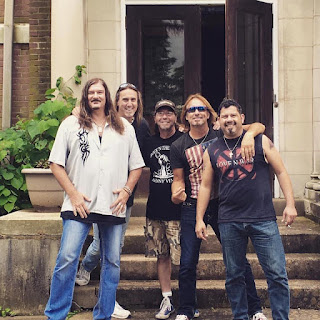 I did. Back in the 90's I had a band called Le 'stat. When we decided to form another band someone suggested a name but I was like yeah let's call it Love-N-War.

Strangest thing that ever happened to you on stage?

Probably not the strangest but the back in the day we had a chance to check out Randy Rhoads during a sound check. I knew a guy who got us in. We were leaning at the front and watching him. He actually came over to the side of the stage and threw me his pick, which I caught. Now that was cool but then a while later I gave the pick away to some guy during a heavy night of drinking. He talked me out of it.

For me its all about satisfying. I want people to hear our music and like it. I want them to feel like I did when I listened to music. I want to put a good product out. To me it is an outlet. I just want to make good music. I love it. Hopefully you will like our next release, EDGE OF THE WORLD.