CRY OF THE WOLF INTERVIEW WITH AL RAVAGE of RAVAGE

Tell us what is new?

well we have a new album out now 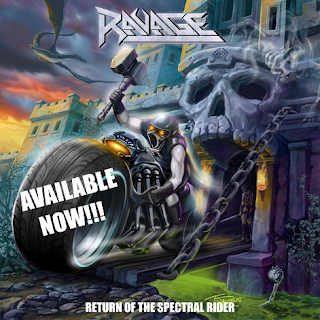 how long did it take to write the album?

It was actually already recorded. we originally recorded it 2003. released in 2005. Production wasn't that good. did not get  wide release, only in Europe. was kind of ignored so we always wanted to put it out again but we didn't have the master tracks. so we put together a new studio, and figured the best way to test it out would be to record the whole album over again. so we did.

Artwork was done by the goosebumps book artist. How did that come about?

We had used the MEGADETH artist ed, for the other albums. I wanted to use him again but my brother who is the guitarist in the band, said we didn't want to become a MEGADETH album cover band. It was cool last time, but we wanted something different. So we contacted the artist who did the goosebumps covers so he did. nice guy. we were surprised he would work with us but he did.

Trying to put something together. opening up locally for who ever comes through. nothing solid. day jobs. extensive touring is not something we can do. we tried to do a headlining tour last time but without support that did not turn out well. We are willing to play pretty much wherever. trying to get some shows over seas if we can.The last album sold better in the us but we had a us label. Just trying to get people to listen to us

You have played over seas before?

Yes. we had a couple of chances to play a few shows way back in 2006. We played Sword Brothers. In 2008 we played at the Magic Circle Festival. That was a battle of the bands format. We got to play twice in two days and saw a lot of cools bands.

Well as exciting as it can get in the plane on the way over. Can't get to crazy on a plane for 7 hours. But at the gig we got to hang out and drink all day. Saw MANOWAR, ALICE COOPER. It went by so fast. It was cool. Met a lot of cool people. Played in an airplane hanger. 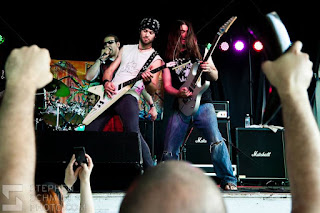 Positive. you can reach people on the other side of the world. I like that. You can get the music out there. The negative is that there are so many people using it now that there is all this sort of white noise and there you are trying to be heard. Its' tough to stand out. We try to advertise and build a network as much as we can. Trying to push our world wide ravage street team. We appreciate anyone who listens to us. We have some live streaming plans.Next couple of weeks we should be able to do a live stream event.

You keep it true.

That is what has kept us around for 21 years. A lot of trends have come and gone. There is no reason to change. We lived thru metal core and nu-metal and even grunge. You couldn't even find an IRON MAIDEN album in a store back then. I see metal as always having an audience. Good metal will always find an audience. It gets you going. There will always be kids getting into it. The big festivals in Europe are still strong.

Craziest thing that ever happened on stage?

We were playing an outside gig when some sort of micro burst completely destroyed the stage. We retreated to this cabin during the festival.It was crazy.

Any festival you would love to play?

we would play a backyard barbecue overseas if you got one. They are really into it. Anywhere is awesome. Obviously Keep It True is a good one.

Ravage is a new England icon, keeping the metal flame burning here in the states long after most other traditional heavy metal bands have folded, quit or retired. They keep creating the finest metal of the purest quality. Ravage is truly American metal. pick up the latest release "return of the spectral rider" now!!!