"I'm not a little girl anymore" 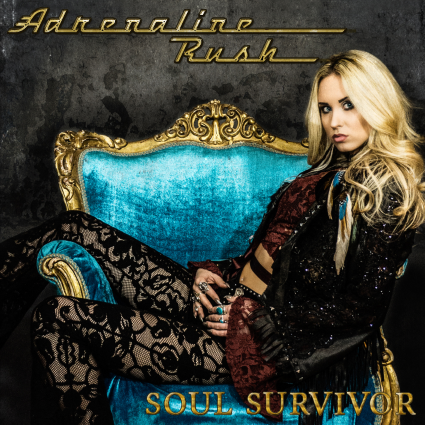 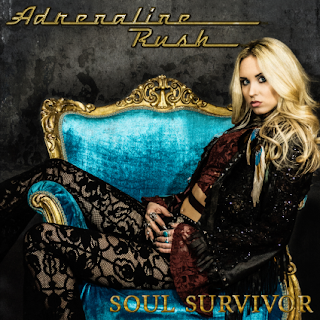 As rock and roll bands go, Adrenaline Rush has it all. A fantastic lead singer with looks equal to her vocal prowess. Plus a hard rocking band behind her, with shreds and riffs that set them apart from other bands of the genre. Hailing from the musical powerhouse of Sweden, Adrenaline Rush is poised to release their latest offering "Soul Survivor" via Frontiers Records. Having heard the album previously I jumped at the chance to discuss with Manning her thoughts on music, rock, and what is in the water of Sweden.

Congrats on the upcoming album. "Soul Survivor" has more of a mature sound overall. Any thoughts on that?
Thanks so much. It's True. Yeah. I love the first album. But a lot has happened since then. I have grown a lot. The band itself has new members and I think of myself as more of a grown woman. It's been a couple of years so I wanted to have that 80's feeling but a little rougher this time. I'm not a little girl anymore.

Are you a fan of 80's music?
I love bands like Judas Priest. I wanted this album to follow that this time. I listened to my heart this time. So yeah you can hear the old Adrenaline Rush but it's definitely heavier this time. 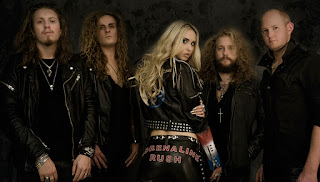 In terms of touring what are the plans?
We have a release party in Stockholm next week and then we will be at the Frontiers Rock Festival. It's a great festival. Lots of fans and bands. We were there in 2014 or so. It's a fun weekend. Nothing is booked beyond that but hopefully. We will see. We are still at an early stage with this band. Hopefully we can get to other festivals.

Do you enjoy the live stage experience as opposed to studio?
That's the plan. I love doing live shows. That's my main thing. Just give us a call and we will be there. Of course my dream is to play the states one day. Always been my dream. Hopefully.

Favorite song on the new album?
That is a hard one. I love Soul Survivor of course. That's why I named the album after that song. That's me. That is what I stand for. Stand tall and listen to your heart and do the things you like and love. Be a soul survivor. That’s my fave and then depends on my mood. The first single "love like poison" is the first song I heard and felt this is the main song. The direction.

Personally I like "Don't Wake Me up".
Really? Thank you.  That is probably the oddest track. It's moody and different.

Who are some of you main influences growing up?
I love the rock and roll scene since I was a little girl but it's hard to find female vocalists. I love 70's rock and roll. I love Fleetwood Mac, So Stevie Nicks, of course.  Janis Joplin..Joan jett..Vixen…but my fave is Hanoi rocks and mike Monroe. He is my hero.

How do you feel about the current state of Rock and metal in general?
You know it is a hard genre to be in. There is not a lot of money, but I think it is positive. There a lot of really talented rock and roll bands out there. We are a bunch of crazy kids doing what we love. And we continue on. Rock and roll is the greatest thing. It's not just about the music it's about the lifestyle as well.

How do you keep your voice in shape?
I love earl grey. So I am a tea drinker. I try to be good at warming up my voice.

Tell us something about you that your fans would never guess.
Hmmm. That maybe I started out as a pop singer. That is not a secret. Since my voice suits that style of music as well.  hmmm. I am a real hippy girl at heart. My friends call me hippy.

Anything you listen to that fans wouldn't expect?
Well maybe the harder stuff like priest and so on. I love Accept.

What is it about Sweden that produces so many good bands?
It's the freaking cold. We don't have anything else to do. We are able to study music at an early age at school here. Or it is something in the water. I'm still trying to figure it out. We are a small bunch of people who like it and love it. We are at the same rock pubs every Friday night. We support each other's bands. It's a cool thing to be part of here.

Anywhere in the world you would love to play?
Well of course the states. I have family in Brazil so that would be cool as well. Everywhere. I would love to travel the world. Just spread my music.

How active are you on social media?
We are active. We have face book, the homepage, Instagram. You can follow us there.

Is there a good and bad with all this access fans have nowadays?
I think it's easier. Pros and cons. I like the mystery side but it's cool, you can do live chats with fans. If you can separate life from stage then yeah. .. I am a bit private. You have to have the right balance.