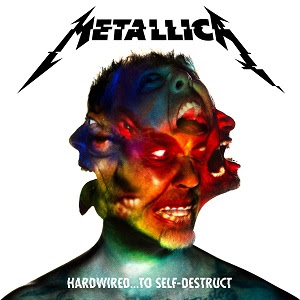 As a young proto-metalhead living in the hard streets of Riverside, Rhode Island we would all gather at whoever had the latest vinyl release and rock out for hours. Discussing techniques, listening to lyrics, guitar solos. The best albums offered up energy at its purest form. It transmitted from the vinyl grooves right into our little teenage brains. You could literally feel what the band or artist was trying to convey.
Metallica's latest release, Hardwired to self destruct offers up a modern day version of that same energy and spirit from days gone by. It is a powerful statement from a band that many had written off. One song...Now were all dead...that is the only song you need to listen to. But there are many, many more. This is grade a material from a group of artists who managed to capture their energy and channel it through this disc. This is real, this is power, this is the definition of  a classic metal album.
Another great sign of a good, solid album is that you can listen to it over again. This album does that. Another sign is when you discover that moving beyond the title track you still find perfect gems of songs. Like Iron Maiden, and AC/DC before them, on this album there is not one weak or throwaway song. Yes we waited but damn it was worth it.

All lyrics written by James Hetfield.

Tracks 5–13 were recorded live at Rasputin Music in Berkeley, California on April 16, 2016, for Record Store Day. Track 14 was recorded live at U.S. Bank Stadium in Minneapolis, Minnesota on August 20, 2016.

Credits are adapted from the album's liner notes.[48]