Tyketto is a hard rock band based out of New York City. The group was put together in 1987 by former Waysted vocalist Danny Vaughn, Brooke St. James (guitar), Jimi Kennedy (bass), and Michael Clayton (drums) completed the lineup.
By 1990, the band had signed to Geffen Records and released their debut album Don't Come Easy, which included the successful single "Forever Young." Musically, the album was somewhere between Whitesnake and Bon Jovi, and Tyketto opened for the former on many bills. However, the rise of the grunge sound in 1991 saw Tyketto's hopes of a big breakthrough begin to recede. Jimi left the band and was replaced by Jamie Scott. Their second album was rejected by Geffen and finally emerged in 1994 under the title Strength in Numbers on CMC International in the USA and Music for Nations elsewhere in the world.

2014 brought with it the 25th anniversary of the band forming and major touring plans and bookings followed along with the release of the band's first DVD entitled Documentally Yours. The first half of the year saw a run of UK dates built around the Hard Rock Hell AOR Festival all of which were used as live prep for the booking on the now prestigious Monsters of Rock Cruise which sailed from Miami in late March. The two shows on the aforementioned cruise would serve as a springboard for several other high-profile booking such was the caliber of the performances put in on board. The latter half of 2014 saw a twelve date, five country run around Europe to round out a stellar year for the band.
The band released their new album 'Reach' on October 14th 2016. The album features bassist Chris Childs in place of Jimi Kennedy and has received excellent reviews---from wikepedia

I think we would all be thrilled if we can stay this happy making music together. 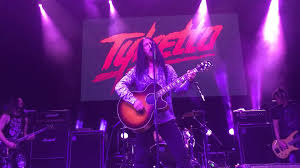 Thank you again! Thanks for your support!!!