I had the chance to chat with KEE MARCELLO, formerly with the band EUROPE, EASY ACTION, and now recently signed to FRONTIERS RECORDS. I sat in my car on a cloudy 70 degree New England day and he was at home across the big pond.

"I'm in Gothenburg Sweden and its raining. Rainy skies are not unusual for the west coast of Sweden.


What is in the water in Sweden? There are so many good bands pouring out of the country.


(laughs), well I tell you it has not always been that way. I was in a band called EASY ACTION back in the early 80's and we were the first Swedish band to ever sign a major record deal. What happened here is that we have really good music schools here in Sweden. And that has given rise to all sorts of acts like IN FLAMES, HARDCORE SUPERSTARS. The music school system is really happening here.


Tell us about the making of "Scaling Up".


what I really wanted to try and get back to what is instinctive kee marcello. What comes out if I don't think? I try not to think. Just play with the heart. There are a lot of 70's in that. Which is not a bad thing. I try to write just me and my guitar like I would in the 70's in my room. Trying to get back to just heart and soul. How does it feel to not think? You are not catering to any label. You just do your own thing


That heart and soul vibe comes through. Do you find it harder or easier to write tunes after all this time?


I think it used to be much harder. Possibly because I involved the thinking process. It should be something you feel. From a logical point of view you piece different things together and make a song. But you have to find a way to figure what the song is about. This is key to me. When I understand it I know what kind of words to use and then it just writes itself. That's the way it works. Like the song "miss you much" it's a catch phrase chorus, kind of reverse psychology. When I had that chorus I really knew what the rest of the song would be about and the song just wrote itself.

And then you can base the lead break on the emotions of the lyrics.


Oh yeah. The lead breaks to me are often extensions of the vocal melodies. It takes over what the vocals can't really do.


Are you using a lot of effects or just a straight guitar/marshall player.


Most of the leads I do are over dubbed but I don't want to use effects when I record in the studio. I want to be able to choose whether I wanted delay or all that. I'm used to the sound of playing straight through. Some chorus. I'm not the guy who loads a lot of effects. I want a good amp sound.


So less is more


I think it is. It's much better to learn your sound and then learn to like it. You get lost in all the effects. The same with learning to like your voice. It's hard the first time you hear your voice recorded.


Right now I am doing an arena tour which is called ROCK OF 80'S which is the singer for HAMMERFALL and the singer for CANDLEMASS and a lot of other performers and we have been selling out arenas here. We are doing this through October. At the end of this we will embark on the Kee Marcello tour. Starting in Scandinavia and then to the main continent. And then hopefully we will come to the states. Maybe a package tour. Or mini festival. Seems to be the way to go nowadays. 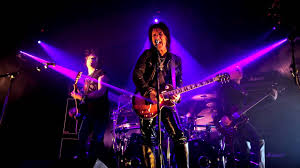 What is the craziest thing that has ever happened to you at a gig?


Well most I cannot talk about but one thing was this. I was at a meet and greet in London signing albums and this couple came up and said they just had a baby.  And they said we love you so much. You and Anders(Johansson, Drums) from HAMMERFALL, so we named our baby Anders Kee! I mean can you imagine such a name? The poor kid. It's not even a name ( laughs) You know amazing stuff happens. It happens all the time. One time someone threw a hand grenade on stage....It actually was a smoke grenade. I mean you just start thinking this is it.


Does safety at concerts in light of recent events concern you?


I never really thought about it. I mean you would be the last to know. Once in Oslo I had death threats against me but my then manager didn't tell me until after the gig. But you know I don't really think about that stuff.


And I understand that you are in addition to a musician, a professional horse racer.


Yeah. I am a harness race driver. This is for me the ultimate way to relax. I need to do that. I think music 24/7. When I have some days off which is unusual I will go to the stables and go out and ride. It is really fast. It is awesome. I love the animals. The experience of training in nature. It is something I need.