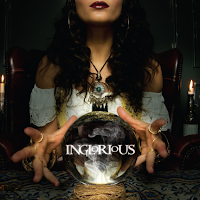 Inglorius
Let me preface this one by stating the undeniable fact that Frontiers Records is keeping the flame of both hard rock and metal alive. Here is another killer release from this giant of a label.
This band tears through your ears at breakneck speed. Not since the mighty days of Led Zeppelin has a band captured such soul searing hard rocking tones. The production is 100% superior to most albums I have heard to date. The blistering combination of melodic leads and hard rocking vocals are a testament to this bands power. Inglorius is the band of the year so far. You have to get this cd.
tracks like “High Flying Gypsy” comb the depths of deep purple meets Zeppelin in perfect form.
“Holy Water” offers a smooth bluesy Bad Company-esque journey through a master class of licks and melodic vocal runs. This is perhaps the best song on the album. Such dynamics
captured in perfect clarity.
“Bleed For You” is a soothing transition to a soul packed slow down. Reminding the listener of classic Rainbow meets rival Sons. This is hard rock dna spliced with bluesy soul.
You cannot proceed this year without picking up this cd and playing it loud!.

Formed in February 2014, the band is fronted by Nathan James, who made a name for himself having sung for the multi-platinum selling Trans-Siberian Orchestra, and Scorpions guitar legend Uli Jon Roth.  Nathan was looking for like-minded musicians that desired to make incredible rock music in a very honest fashion.

Nathan thought to himself, “Why are those classic albums so awesome?” He realised it was because “the musicians were recording in an organic way; they could track it live and capture amazing energy."

“Not only in rock but in Motown and even classical music they tracked everyone in the room at the same time,” adds Nathan.  “The air movement from a bass drum, that same excitement you get when you perform, and that's exactly how I wanted the album to feel."

Mixed and mastered by John Mitchell