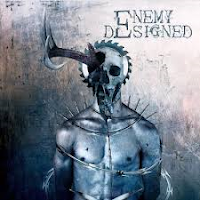 Direct from Halifax, Nova Scotia comes the premier death metal power act, ENEMY DESIGNED. Their energy is unstoppable. Their devotion to their music is strong, proud, and loud. This band is on the fast track and they took some time to answer some questions.

Matt did. It's from a lyric in a Fear Factory song.


2.Who writes most of the music and/or lyrics?

Matt starts by coming up with riffs, to which the bass and drums are added during jams. Mel writes all lyrics.


3.How is the metal scene in Halifax?

It's a good scene with many great bands. Great group of fans too - they come out to shows often and support the local bands.

4.Any thoughts of playing in the states? Or overseas?

We would LOVE to, it's just talking to the right people and making the right connections to have it happen - that's the difficult part. Someday!


5.Melanie as lead vocalist, who are your main influences? and the bands?

My main vocal inspirations are Randy Blythe, Johan Hegg and Phil Bozeman with others being Phil Anselmo and Jon Davis. They all have a large influence on my lyric writing.

My favourite bands are Lamb of God, Amon Amarth, Septicflesh, and Pantera.

6.Name a band you love to open for or tour with.

We used to play Raining Blood by Slayer, and we have moved on to play Roots by Sepultura. A new one is in the works!


8. Craziest thing that has happened on stage or off?

At a show we played in Berwick Nova Scotia, our old bassist Spanky played most of the set while standing on a piano bench, and then cutting his hand open and bleeding all over his bass.
Another crazy moment was opening for Vital Remains and having them watch our set.


9.I know melanie is heavily involved with instagram. How much exposure have the social media platforms offered ENEMY DESIGNED.

We're able to meet new people that we would otherwise never come into contact with. This has allowed us to be heard around the globe and gain fans who wouldn't have heard our music otherwise. Enemy Designed has FB, IG, Twitter, Bandcamp, Souncloud, etc and has Conspiracy Creation (album) available on iTunes, Google Play, Spotify, and HMV stores. We definitely wouldn't be anywhere without social media, since Halifax is in the middle of nowhere and it's 7+ hour drives to larger cities.

10. what are peoples reaction to the band the first time they see you. I'm sure Melanie must surprise them.

Mel - People who don't know who we are think I'm just a groupie, until I start growling into the mic haha!
Matt - Most people love what they hear and are surprised that we use 8 strings/how heavy we are.
Alicia - People are usually pretty surprised at first, then get into it real quick. Mel's quite the powerhouse n' there's not a lot of female fronted metal out this way
Kevo - That's a chick singing?


11. what are the future plans for the band?

We are looking to get on larger tours and expand our fan base. We are currently working on an album so once that it out, we will go full force with shows. We currently have 10 songs in the works (all done by Matt so far) so that will be the focus for the next while. 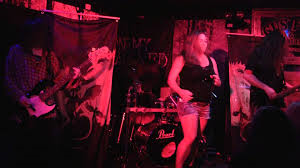 12. throw in some things that people might not know about the members of ENEMY DESIGNED


13. Anything you want your fans to know?

We just want everyone to know that we appreciate any and all support given to us. Whether it's you buying our album, coming to a show or just telling your friends about us, it brings us a step closer to our dream, so thank you SO much!