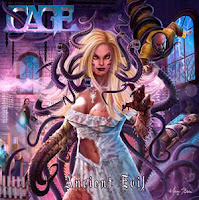 I talked with Sean Peck, vocalist and visionary for the metal band, CAGE, as they were about to visit ground zero in New York City. Sean Peck Is an author, vocalist, heavy metal spokesman. His imagination knows no limits. He is the Stephen King of heavy metal.  I found this metal vocalist to be full of ideas and driven to bring his band to the forefront of legendary metal bands.

So what's new in the CAGE world today?


We are on the tour and today we will be doing a little sightseeing at ground zero.


In Light of recent events overseas. How do you feel about security?


I am actually going over to Israel Dec 17th, on the Metal Titans Show.  So that is going to be a different perspective. They deal with it 24-7. It's a fine line between balancing personal liberty and protection. I'm not all for massive phone tapping. Everyone should just be strapping a pistol to their side. Let the chips fall where they may. If someone had a gun at the concert in Paris then there might have only been like two casualties. Killing stops when a good guy with a gun shows up.

Tell me about the new album.


The new album "Ancient Evil". It's a horror concept story based on a 150 novella I wrote. Takes place in London England in 1869. We are all King Diamond fans so we decided to try our hands at something along the lines of ABIGAIL or THEM.  It's a 78 minute, 19 track mega epic horror story. The reviews have been hailing it as one our best albums ever. We tried on purpose not to make it too complicated and it seems I underestimated the metal community because people are rocking out to it on first play.


When you sat down with the band to begin writing this concept idea. Did you have an idea that it would be as lengthy as it turned out in the end?


Well we followed kind of one song per chapter. That was the formula but then we had like five or six pieces. There are sound effects also to set the mood. Blaze Bailey(ex-Iron Maiden Vocalist) did the voice over for the main character. He did a great job playing the main character, Eliot Worthington. It came out like Radio Theater. Then we added another track based off the cover on the record.


How did working with Blaze come about?


Well I needed someone with an English accent. I sang Man On the edge with him when we opened for them. So we became real good friends. Just a great guy. The guy should be a motivational speaker as a side job. Really talented.


Do you jam out the ideas or is everything already written by you or someone else in the band?


The writing of the songs are all different. Sometimes the guitar player has a whole piece composed. Sometimes I have a verse and melody and they finish it. It's a real collaboration. Then we just jam. Ancient Evil was written using every kind of writing technique. This took about a year and a half to write the whole thing. We had finished it last year. We signed with a new label so we had to postpone the release for a year.
Do you have control or does the label as far as creativity?


This is the first time we have had a label exert control. Heavy suggestions. Before we would give a label the product and they would just say ok that's great. This label want to control photos, videos and they are really helping with the tour. So it's really cool because they show they care. They want to develop us and see a big future for us.


Where do you see the band in five years?


In five years...bigger than maiden. Got our own plane..no two planes..Biggest stage set you have ever seen. Lasers and robotic Godzillas fighting on stage while we play. That is where I see the band. My imagination has no limits. If I had an unlimited  budget then I would put on a crazy show.


You can tell you're excited about this band. Tell me some things that you do that are different from other metal acts out there.


On this record, Ancient Evil, we have a book, an audio book. E book. We have a music video that is basically a horror movie. We are trying to innovate in the idea department.  I can see this album becoming a horror movie. If you change the metal formula you lose the essence of what this music really is. It loses the emotions.  We were raised on Iron Maiden, Metal Church, Wasp and all that great stuff mixed into a blender and we speed it up by about 35 beats per minute. Something that every metal fan can find something they like in the music of CAGE.