Cry of the Wolf Magazine interview With CAMU
Official Press Release:
Nothing great ever comes easy & the most rewarding way is usually the hard way, which is the essence of “The One You Leave Behind”. Four years ago when my son was 8 months old, my wife & I mustered up the balls to leave everyone & everything we knew behind and move 7000 miles away to start a new chapter in our life. The task was so momentous that I had to cruise through it at times. What I left behind was the person I had always been, everyone I knew, and who everyone knew me as. Everything I experienced in the last few years, becoming a dad twice over, starting a business & relocating again has been new and foreign to me but in the end I came out the ringer a much better & more fulfilled person. Iv’e always gone with the flow in life, never could have imagined it would take me from Helsinki to Hawaii.
“The One You Leave Behind” has been a very difficult yet rewarding song to write & record. I completely changed my approach with this one and dug deep. If you harness the spirit that your inner voice represents you can achieve anything. Your gut feeling is fire. Don’t make plans just do.
The song took on a life of it’s own and consumed me and I gave it my all. The song contains some of the actual demo recording as I wanted to keep the songs authentic feel alive. It was recorded on three different continents and is raw, honest and a testament of who I have become, showcasing a different side of me. I actually recorded my vocals on my balcony at night, and I have to say I liked singing this song as I wasn’t belting all the way through. I’m happy and relieved it’s finally released.
What started off as a nice little riff inspired by attending what was to be Tom Petty’s last show ever at the Hollywood Bowl, made me question my sanity at times, adding to it the fact that I recorded this song between 1 and 3 AM exclusively, like a hermit isolated deep in the jungle of Hawaii Island.
I had every technical set back under the sun with this one, broken hard drives, crashed drones & lost tracks. I almost died falling into the river above a 40 feet tall waterfall, only saved by grabbing onto a rock at the last second.
The video is something I am very proud of, the coolest thing I have ever created up till this point. It really showcases how magical the place I now call home is. While filming and recording “The One You Leave Behind” we were hit by hurricanes, floods and a volcanic eruption, yet beauty & life prevails.
Part 2 of the Trilogy is about giving into the universe and grabbing life by it’s balls and riding that wave from infinity till beyond, if you dare. Trust me, you’ll be better than fine. Life is magical so enjoy it. 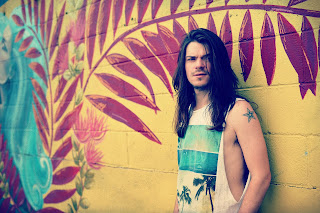 1. Take us through your mindset when composing a song like “the one you leave behind”
The original inspiration struck after I left Tom Petty's last show ever. Got home, picked up the guitar in the video and started playing the intro riff. I thought it was cool and then left it alone for a month or two. Then when I was deciding on the second song for the Trilogy I picked up the track again and started recording it section by section. That's how I write & record. I'll complete the song section by section, I never write the whole song. I like to see where it takes me. For the lyrics I ended up writing a song to myself from myself. In a sense the now older me singing to the younger me if you will. I thought that would be cool to identify with, not that I gave it that much thought initially. It just came from somewhere, worked out well and I dig the concept. I usually write the music first and the lyrics based on the vibe of the song. This song took a while to complete as I only worked on it between 1 and 3AM.

2. During the video shooting you mentioned almost falling into a river. Tell us about that
Not almost, I did. I was waiting for the drone to film me on top of this 40' waterfall and I saw it coming so I took one more step trying to make the shot even more epic. I misstepped and fell into the water above the waterfall. I was 2-3 seconds from the fall. I saw a rock that I grabbed onto. Then I realized I had nowhere to swim and the current was pushing me over the rock so I emptied my lungs and dove straight into the undertow kicking the rock as hard as I could, I managed to dive upstream and climb out. While this episode unfolded the drone crashed into the cliff wall.... Needless to say we chose a different waterfall to film at once the new drone arrived in the mail. Was very lucky that day.

3. are you active with social media and do you see it as a positive or negative force in music today

I should be more active, seems to be the thing to do but I don't have the need to post all the time, I post when it has to do with my music. I'd rather make music and hang with my kids than to be glued to my phone fishing for likes, I'm ok with myself, I don't need likes to feel good about myself. I do post if I have some cool content but you won't find me posting what my mood is haha. It helps reach people who would never find out about you because of all the stuff online today. So it's all good.

4. What inspired you initially to become a musician
The gatefold of KISS Alive 2 when I was four years old.

5. what has been the most rewarding aspect of making music for you
The whole process of hearing a melody in my head, actually writing a functioning tune, arranging it (which is my favorite part) recording it, releasing it and then getting feedback that someone was either inspired by a song or has a special memory attached to it. That is magical in many ways.

6. What has been the hardest part of being a modern musician
Being blinded by not being awesome enough in the past and the frustration that brings with it.

7. Something in your music collection we would not expect
My favorite album of the last two years has been "The Golden Hits" by "Duke Kamoku & His Islanders" I have worked up mad streams on that album. It's the soundtrack to my daughters first year and a half. Check it out for awesome vibes.

8. Strangest thing you have ever experienced at a gig
We were playing in Russia with NAKED about a decade ago and when I went up to the mic to start singing the first song I got electrocuted in my face by the mic. The full juicy jolt hit my front teeth as the PA was not grounded, didn't understand anything for a good 30 seconds and the pain was like dynamite toothache times 1000.
Few other highlights are playing a sold-out show in Tokyo and our first US tour as a whole. Oh and once a coked-up promoter in Italy locked the whole band in a room filled with snakes for 6 hours and didn't pay us.

9. Where do you see the future of music and performance heading?
It'll keep keeping on. Hopefully, it heads towards more live instrumentation at some point.

10. Are holograms ok with you?
Since no one has ever asked me that before my answer is yes they are.

11. Anything you wish to convey to your fans
I'm a guy from Finland who rode the flow of life all the way to Hawaii somehow and I love making music. Give my music a listen as you'll get to experience me giving you my all, to create memories and let my music be the soundtrack.
https://camumusic.com