Cry of the wolf magazine interview with VEONITY

On the verge of releasing what can no doubt be another epic power metal  triumph, we interviewed swedish legends, Veonity. Regarded as one of the brightest hopes for continued metal success around the world, Veonity was voted 2016 power metal band of the year by cry of the wolf magazine. Be sure to pick up their next release, legend of the starborn on sliptrick records on November, 27th.


First congrats on the upcoming release!
Thank you, we are really looking forward to show the world what we have been up to this past year!
Take us through the writing  process for Legends Of The Starborn
To be honest, which I think I have to be here, we started writing this album a few month before “Into The Void” was released  ha ha... Me and Anders who writes the music just have an abundance of power metal flowing through us. We had the concept story pretty clear from the beginning and we also had an idea as to where we would take Veonity musically.  The hard part this time was to choose which songs to be included in the album.
I think the continued storyline from your last release to this one could easily lend itself to a book. Do you have any plans to have a book written?
We actually haven’t thought about it yet but it seems like a fantastic  idea. A futuristic-sci-fi-adventure-fantasy with a viking twist.Tales of bravery, heroism and mankind’s endless struggle for freedom. Who would not wan1t to read that book? 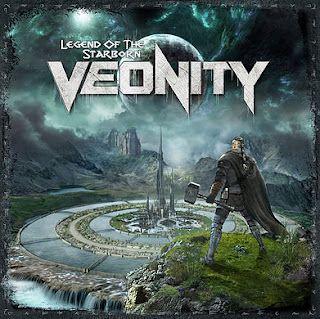 In the modern age do you find creating/writing  music to be easier?
I remember when I was a teenager back in the mid-90’s. I used my tape recorder to record small stuff I played so that I could remember them. The problem was that it was almost impossible to find the stuff you recorded. Fast forwarding and rewind all the time until you find that thing that you recorded 1 month ago  haha. So yeah, I would say computers hade made everything much smoother. Especially now when easily record your demo songs at home so that when entering the studio you have a clear picture on how the song should sound.
How many of the new songs will you plan to perform live?
This only gets harder and harder for every record you make I think. We have so many songs that I know will never be played live. When making a set list you have to balance between old and new stuff. But playing the new song is always the most fun. 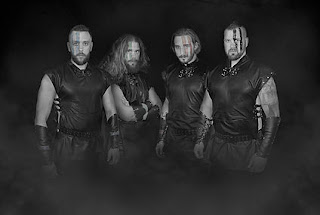 Any future live dates you can confirm? Any plans to tour the states?
We are still in the middle of booking stuff so nothing has been made official yet. Of course it would be awesome to play in the states, we don’t have any such plans at the moment but I’m really hoping we will go there in a close future.
Name a band you would like to tour with.
We already played together with lots of bands like Sabaton, powerwolf, Dragonforce and Freedom Call so at the moment it’s kind of hard to say. Maybe it would be cool to go with Gamma Ray next time they toured.
Do you have plans for a dvd or a livestream event?
We haven’t planned anything like that yet but nowadays it is a good way to reach all of your fans.

Did you feel any pressure with the creation of your third release?
Actually we don’t. We are just eagerly awaiting the release :)
Why is Sweden so flooded with epic metal bands?
Sweden is a great country for creating musicians, songwriters, producers and bands. It has been this way quite a long time and I believe that our free eduction system in Sweden helps. The government also supports musicians in different ways like lending out instruments, gears and rehersal rooms. Especially when growing up I remember that lot’s of people played in bands a was doing music I different ways. This kind of competition creates so many epic bands. 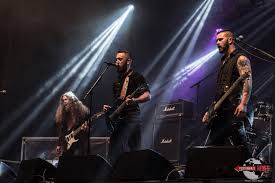 What has been the most challenging aspect of being a musician?
Sometimes you get tired of hearing “wow, you are so lucky to be able to play music. I wish I could to that”. It’s not about luck or to be honest, it’s not really about gift either. Most musicians have put in some serious hard work to get to where they are. I’m talking tens of thousands of hours. This also means that almost everyone can become a musician. All that it takes are hours (and hours, and hours, and hours) of practice and the will to do it.

Do you believe we will find life in space?
They say seeing is believing. Unfortunately I haven’t seen anything yet. But who knows what’s out there? The universe is too big for us to comprehend.
In your ears what makes the perfect song?
Some told me once that an hour after you have listened to a song you won’t remember the quality of the production, how the drums played, or not even how that super cool shredder guitarist played. What you will remember is the melody sung. A strong melody is what makes a song stand out from the rest.

Anything you would like to say to your fans
Without the fans it wouldn’t be possible for bands to exist. Musicians and bands should never forget that. I’m hoping our fans will keep spreading the word of the new era of majestic  power metal.