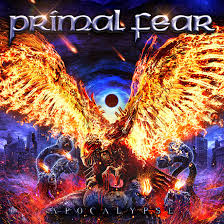 PRIMAL FEAR returns with their latest epic metal masterpiece, APOCALYPSE, on August 10th. Created in 1997 by vocalist RALF SCHEEPERS, and Bassist MATT SINNER, This German  band has been a constant juggernaut of metal anthems and crushing ballads for over 20 years!
This trend continues on the inspiring APOCALYPSE. 11 scorching tracks of molten heavy metal ready to be pounded into your brain. Have no doubt that PRIMAL FEAR is one of the best metal acts on the planet. 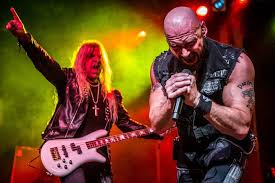 Tracks like, "Kings Of  Madness", and "Hounds of Justice" slice right through your speakers.Epic tomes like " Supernova" reveal a band at the height of its creativity. In short, this album is a true iconic representation of what modern heavy metal should sound like.

Most of their peers tend to veer off in different variations of the metal genre. But PRIMAL FEAR remains solidly entrenched in the magnificent metal they love to create.

Frontiers Records have scored another Power hit with the release of this album. Judging by the sonic presence embedded deep in this album, we can expect many more from PRIMAL FEAR.