METALWINGS for Cry Of The Wolf Magazine
Interview Questions 2018

Metalwings is a Symphonic metal female fronted band from Sofia, Bulgaria. The band was formed in Autumn 2010 by lead singer and songwriter Stela Atanasova. Her idea was to combine elements of classical music with the melodic genres of metal.

Stela Atanasova: In the beginning when I start to compose one new song I create all the music and lyrics. After that the rest of the band joined the creative process with the arrangement of every part like guitars, drums and bass. We spend lots of time to work on every new song till we are satisfied with its sound. Sometimes we even decide to re-arrange one song to improve its overall influence and sound. For example, in our full length album we’ll include the song Immortal Metal Wings which was included in our EP “Fallen Angel in the Hell” but now the song is re-arranged with new Drums. Guitars and Vocals and we really hope our fans will love it.

Nikola Ivanov (Blackie): We always start the rehearsals with a beer and talk about the things we are about to do. After a long and useful sound playing we seal the well done job with lots of laughter and jokes :)

Grigor Kostadinov: Warm up,warm up, warm up, play brutal metal, take a break. And then again. 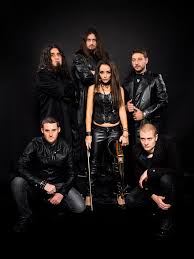 Grigor Kostadinov: Well , there are too many influential bands to me, but I think Dream Theater for their amazing riffs, Iron Maiden for the incredible diversity of music and Periphery for the modern metal tone are maybe the bands who influenced me the most.

4. In your ears, what makes a perfect song. What key elements does it have to have?

Stela Atanasova: First of all, a perfect song has to combine lots of structural elements. It has to use beautiful vocal lines, complex harmony structure, unusual chords sequence, mystic lyrics, lots of backing vocals, different parts with tempo changes and changes in measures, interesting guitar riffs and complex drums. The perfect song to me is the one which makes you cry and laugh at the same time – it has to touch your heart and fill your sensitivity with all the desirable aspects of the human soul.

5. Any subject matter you would not write about?

Stela Atanasova: Politics is one of the subjects which we wouldn’t write about. It’s something too far from our music and we don’t want to use such subjects in our lyrics. 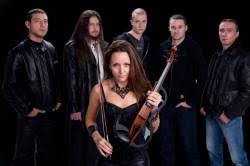 6. Do you feel politics is something artists should weigh in on?

Grigor Kostadinov: To me Politics is not as important as the society’ stage of development and understandings of life.

7. Something in your personal music collection that fans would never suspect

Nikola Ivanov (Blackie): I have a Modern Talking’s vinyl in my music collection ☺

8. Band you would love to tour with

9. How do you fell about social media and its impact on the music business?

Stela Atanasova: Social media is very important for independent bands like ours. We really appreciate support of all the social media which we got through the years. Thanks YouTube we become popular and reach lots of fans all over the world. We think that YouTube is the best platform for independent bands like ours. But of course it’s not enough just to make music videos and to wait the big breakthrough on YouTube. Every new day is a chance to create a new beautiful song and to touch one fan’s soul. 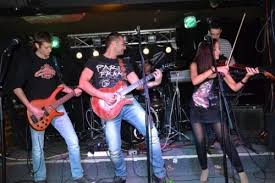 10. What has been the most challenging aspect of being a musician?

Stela Atanasova: The most challenging aspect of being musician is to keep the faith. Very often musicians are people with big hearts and sometimes it happens to get hurt and to lose the point. Sometimes you have to survive and to do impossible things to save the band. It’s very difficult when you have to find new members of the band and to keep the energy between the rest members of the band. Sometimes is so hard to keep going and to lead the rest – to show them a sense to move on. But every time when I face a problem I always look for a solution. As you know every hindrance is a new chance.

11. What got you first involved in music?

Krastyo Jordanov: My neighbor gave me his acoustic guitar when I was 14. That was when I found out that music is my real passion.

Stela Atanasova: I was 9 years old when my mother took me to the Music school in Bourgas to enroll me to study a musical instrument. None of the piano, violin and violoncello teachers agreed to take me because I was already too old to start learning to play these instruments. Only the Viola teacher agreed to take me as a schoolgirl and after 6 months of preparation, they accepted me to learn in the Music school.

12. Strangest thing that ever happened at a gig?

Nikola Ivanov (Blackie): One of the strangest thing that ever happened was at the end of a concert, when two of my stands with the cymbals fell on the last song. Another strange thing I can think of is how once our bassist suddenly turned off his bass and left the stage while performing one of the songs because he had to go to the toilet.

13. Anything you want to say to the fans?

The only thing we would like to say to our fans is:

This is a tremendously talented band that you need to watch. !!!  8/10 Wolf howls