Babylon A.D. is about to release a new album on Frontiers records.REVOLUTION HIGHWAY will be released on November 10th on Frontiers Records. The Band, still with original members, will be celebrating 30 years. The songs on this album are undeniable and certifiable hard rock gems. The band has never sounded better or tighter. This is pure American rock and roll. Hands down one of the best albums for 2017. Check out their new album.
10/10 wolf howls
Below is an earlier interview I did with guitarist Ron Freschi. 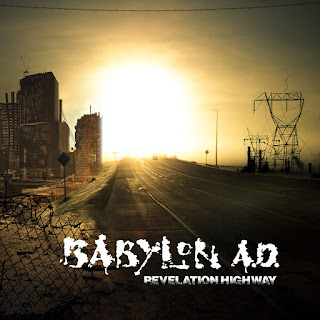 Back in the day when MTV actually played music videos, Babylon A.D. was one of the best hard rock bands to tear across the television screen. The songs were filled with sex and life and just a pure rock and roll sense that few bands actually capture. Their  melodic brand of style was soon eclipsed by grunge and the fickle whims of the recording industry, and the rest is history. But they never gave up and continue to perform select shows to this day. I had the chance to speak with Ron from Babylon A.D. about his gear , his past and the future of Babylon A.D.

How did Syrym come about?
That particular album was a collection of songs that just never made it to the Babylon A.D. albums. They just never made it. ”America sleeps" is really just a demo for Babylon A.D. but it never made it. I was at best buy and I saw , I'm a tech guy, a degree in electronics engineering. I wasn't so familiar with the way people were recording. I just never did it. so anyway I was there and I saw a usb interface for guitar and started to learn the software and it showed me that I had the tools to build my own studio. I found a singer thru craigslist. and we started recording and I could do it my way.

Babylon a.d. is still active?
well what's interesting is we have more gigs booked this year than in a long time. We are doing a show in uk in october and because of that people are contacting us. we are doing chicago, denver and then we are doing another gig in april. we take them as they come. things are boiling up again. its fun and we are very appreciative that people want to still hear us. This year we had a meeting last week and because of the live gigs we are discussing a new record. derek has three or four songs that we demo’d but never made it.

how do you feel about downloading and social media in general.
well as an artist I can say its ....were being ripped off. when you create music you don't intend to give it away for free and then people download it. In the end it's stealing. Because people that do a lot of that... let's switch positions. Say they made something with their own hands and then someone stole it from them. How would they feel? it's the same thing.

Are you active with twiter and face book?
Pretty active. I'm more of an observer. I have a facebook account. and twitter. I have a recording company and do a lot of web work. I'm not  a big tweeter. Babylon A.D. has facebook and twitter. It's a great way to communicate with people.

lets talk guitar. how did you get the sound on "while americas slept."

The echo part?
yes.
well, I took the original demo and we will re release it on the next Babylon demo. I slowly fade in the recording from the original cassette. It's the same riff now. just distorted, slap back echo, some slides and harmonics. Reverb and delay. A lot of it comes from the mix with the new and the old version.

Are you a pedal guy or rack?
I have never been a big pedal guy. I have always been a rack guy. Playing live I try to eliminate all the points of failure in my rig. believe me I want the fattest guitar tones coming out of my amp. I have an amazing 50 watt plexi, I have a blackstar which is just amazing. as far as effects it has always been rack mount. I can just do more with them. I don't knock pedals but I just always lean towards straight into the amp via effects loop. BUt I always lean towards straight into the amp. Just say you place effects between you and the amp you introduce all kinds of noise. When you use an effects loop you have a higher signal to noise ratio.

craziest road story with Babylon?
This was in the papers, We spent 4 hours in Cook county jail after a girl on our bus accused us of rape. Which was totally not true. Turns out after we kicked this really drunk girl off the bus, she was the chief of police' daughter. They stopped us before we left town and threw us in jail. Thank God her friend told the cops the truth and they let us go. That's one story. One of many. There were so many.

With that our conversation concluded. It was a thrill to talk to a guitarist from a band that wrote one of my favorite songs, "Bang Go The Bells".