Cry OF The Wolf Interviews Guitarist PETER GRAIGS, from SCARS OF GRACE

- July 16, 2017
Cry OF The Wolf Interviews Guitarist PETER GRAIGS, from SCARS OF GRACE 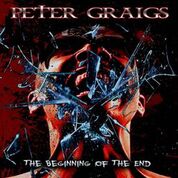 SCARS OF GRACE guitarist and solo artist, PETER GRAIGS, has seen it all. In a lifetime dedicated to his craft he has lived the life many of us only dream about. I found him to very down to earth and we actually talked politics of the world and were on the same page. A rarity in the world of metal I can assure you.

After suffering a debilitating parachute accident which left him with broken fingers and a broken back, he basically had to reinvent himself, his style of playing, everything.

"Back in the day it was playing fast. After the injury I had to reinvent myself. I go with the flow."


We moved on to his influences.

"Classical. I grew up with my dad playing songs on the accordion. From rock to pop. I stay away from the radio. My main guitar influence is of course, Randy Rhoads." 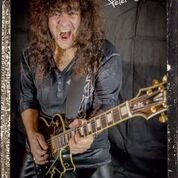 So you stay away from the radio. Why do that?

" I just don't want other music to influence my writing. I like some new bands. Knickelback, Five Finger Death Punch. Some country music. But I don't listen to much rock music."


As a solo artist Graigs truly is solo. Writing the music, playing guitar, bass, and drums.

" I have a small marshall amp, tama set, galien Krueger. Everything is miked. I have an isolation box. It's not that it is so hard to find musicians but the chemistry part of it it difficult."

Does social media help or hurt you?

" It helps. You can reach anyone on face book, twitter. Years ago you had to go through someone to get that personal connection. On the other hand there is so much exposure it is hard to make money. There is so much competition now."


We talked about security and if Europe was turning into an unsafe place to travel to then where would metal flourish?


One of his favorite memories was playing arenas back in the day and opening for IRON MAIDEN and JUDAS PRIEST.

"Played soccer with Maiden. That was great. Priest was more all business, but Maiden were a lot of fun. I actually saw them for the first time in 1979 when Clive Burr was with them. I saw them again on the somewhere in time tour."

Anything you want to say to the fans?

" Be true to you. Be yourself. Find me on twitter. we can interact. Ask me any questions you like."

Find PETER GRAIGS on face book and twitter as well as his home page
https://petergraigs.com/
PETER GRAIGs- The Beginning Of the end (2017)
SCARS OF GRACE (2017)