- June 06, 2017
CRY OF THE WOLF MAGAZINE INTERVIEW WITH JEN JANET OF BLIND REVISION

Tell us a little about the start of the band.

Three of our band members met at college and started jamming. We didn’t sound anything like we do now, but we decided to enter a battle of the bands competition in Boston. It was technically our first show playing together, so we weren’t expecting much. But then we won first place, and we decided to keep going and write songs together. Over time we had a few lineup changes, and we met our other two members through mutual friends. But we’ve been playing together now with this current lineup for almost two years and we are very happy with what we’ve accomplished thus far. We are not only a band, but we are good friends as well. We recently went on tour together and it was a great feeling to be able to do that with people you love hanging out with. 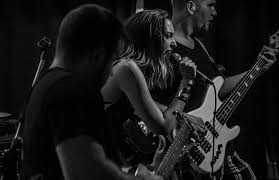 who writes the songs?

It’s a collaborative effort. Usually one of the guitarists will think of a riff or part of a song and show it to the rest of us. Then each person will build off of that. We’d like to continue to create concept albums, so usually the lyrics come last, and I won’t start writing them until the music is finished.

social media: is it a positive or negative for your band

Social media is a huge positive for the band - it is how most people know about us! We are very active, especially on Facebook and Instagram now. I think keeping up with it is time consuming, but very rewarding. We publicize all of our shows online and we’ve heard from many people that they initially found us through Facebook. I think social media can be wonderful for bringing people together for events. It’s also a great way to post photos and interact with people all across the country who might want to hear our music. 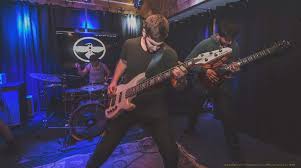 If Coheed and Cambria had a baby with Evanescence, that would probably be it. We write progressive rock music but we do have some metal influences. The vocals are very soft and melodic, while most of the instrumentals are harsher and guitar driven. We have a wide range though. The first song from our EP Of White And Grey starts out very soft and slow, and it has a very post hardcore sound at the end. It builds up to a very theatrical climax.

One song in your music collection people might not expect

That’s a tough question. I think the vocals in the song Ashes are pretty unique. While singing them onstage, I have seen a few people in the crowd start paying pretty close attention as soon as the vocals come in, just because it’s not always a style you hear in rock music now. A lot of symphonic metal bands do an operatic style of vocals, but most of our songs aren’t strictly symphonic metal. We have a blend of many different styles, and I appreciate a lot of different genres, so being able to blend them is really awesome.

What is next for BLIND REVISION?

This fall we will be recording our first music video, and we have an interesting storyline for it mapped out so far. It will be wonderful to see the final product. I won’t give away any information though! 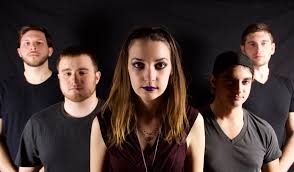 strangest or craziest thing you ever experienced onstage or during a tour?

At one of the shows on tour Kirk’s battery pack popped out of his wireless, so he jumped into the audience and moshed with everyone to our for the rest of the song. When something like that happens, you got to make it work!

At the Massachusetts show on our tour, the venue actually sold out, so it was packed with people. I noticed after going through photos of that night, that Kirk was wearing some fishing hat while playing onstage. Apparently some guy in the crowd just put his hat on Kirk, and Kirk just jumped into the crowd and was playing guitar inside a mosh pit. So that was pretty crazy, especially because I didn’t even realize it happened until later.

If you could tour with a major band which one would it be and why?

I think most of us would agree that we’d love to tour with Coheed and Cambria! That
will probably never happen, but their music has influenced us a lot and we really like the idea of having a concept album that tells a story. Their ability to write music surpasses many musicians today, in my opinion. And of course, their stage presence is great too! They seem like a genuine group of people, so of course it would be a dream to hang out with them and tour someday. Their fans seem very loyal too, and from what I’ve seen, most of their shows are fantastic.

Favorite thing to do before a gig?

I don't really have a favorite thing to do, but I’ll usually do vocals warm ups and drink plenty of water!
The rest of the band likes to have a few beers. 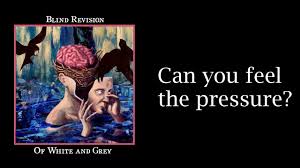 future plans for the band?

Even though we just released Of White And Grey, we recently started writing a new song, and I really like where it’s going. We probably won’t release new music for a while, but the writing process for the next EP will be an adventure, that’s for sure.

Anything you would like to say to your fans?

We love talking to you on social media! We’re always interested in what you guys want, and what you like to do. We also post about all our new shows as soon as we book them, and you can find them on the tour dates tab to the left of our Facebook page. Feel free to follow us on Facebook, Twitter or Instagram, and it’s @ blindrevision for all three sites. We post a lot of photos too. I know sometimes talking to a band is intimidating, but the five of us are honestly very goofy people.