CRY OF THE WOLF INTERVIEW WITH MIDNIGHT PROPHECY

- June 12, 2017
CRY OF THE WOLF INTERVIEW WITH MIDNIGHT PROPHECY 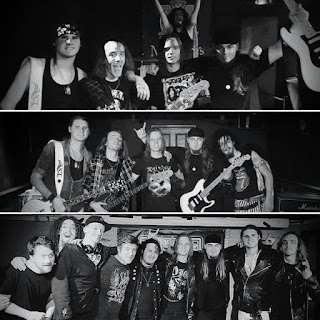 That would be Pete. After a long time struggling with names we started thinking about themes, darkness is a general theme in metal and prophecies or tales of occultism and foresight often make for the best stories, so that's where it comes from. One day Pete came out with it and we were all "Yes!" In agreement.

Describe your writing process. Does everyone contribute?

Our process for writing varies most of the time, a good 90% of our songs are musically cowritten between members but more recently there's been more ideas coming out of Chris with the odd bit here and there from someone else. It mostly depends on who has the time to put their ideas to paper music wise. Lyrically everything is written by Craig, with perhaps a line here and there from someone else if Craig likes it.

Are there any subjects you won’t write about?

We'd like to say we'd never write a song regarding love or any other subjects closely related. We like to stick with the themes & lyrical content of realism, history and mythology as best we can! 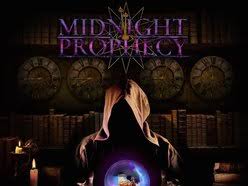 Different bands for different people of course. Pete is a big fan of Queen and Metallica, Sam of Alice Cooper and Motley Crue whilst Danny, Chris and Craig are all big Iron Maiden fans.
Craziest thing that ever happened to you at a gig?


There aren't many tales to tell of our shows yet, probably the craziest would be watching one of our fans being sick into his pint glass...

Festival you would love to play at?

All of them! Download, various Sonisphere's, Rock Am Ring, Wacken, Rock in Rio. All those little ones.
Social Media..do you find it a positive or negative for bands?

Social media is a strange world, for exposure it's excellent for a band like us at our stage though, when it comes to trying to get people to buy your music it's next to impossible when often bands put out music for free. Having to buy adds on Facebook is a nightmare too!

Something in your music collection we would never expect?

Pete has a Nickelback CD. Danny has a compilation of classical greats. Craig is partial to a bit of Robbie Williams too...
How would you describe your music to someone who has never heard it?


Classic/Traditional/Old School Heavy Metal. That's how we describe it when we're asked. It's classic, powerful, 80s style heavy metal, nwobhm-2 if you like.

Name five bands you would love to tour with?

Real Ale, Jack Daniels, Guinness and Cider for Pete.
Tell us what is going on in the world of Midnight Prophecy? Albums? Tours?


We've just finished a month break from band duties, now we're writing tracks for our upcoming album/EP (we haven't quite decided what to release yet) and we're playing as regularly as possible. Assume a tour would come after we've released whatever it is we release this year!

Anything you would like to say directly to the people who will be reading this?
First of all, thank you for taking the time and having the interest to read about us! We hope you're all well, happy and enjoying life. If you haven't heard us before and you like heavy metal, check us out, you might enjoy it! Hopefully we can come play for all of you one day.