Interview with Danny Knight of Crown Of Earth 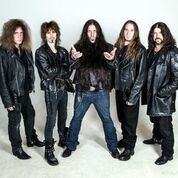 CROWN OF EARTH is full tilt classic metal band pounding through the modern era like a juggernaut. Their sound is power, their attitude is uncompromising.I spoke with Danny Knight, vocalist, regarding shows, metal, and the rise of social media.

How long has CROWN OF EARTH been around?

" 5 years. We have opened for a lot of national acts. Coming up will be Raven, and Blayze Bailey. Working with a guy for our next video. He has a warehouse full of lights. Some were even used by KISS. and he has all this memorabilia like POISON'S wardrobe chest. Things like that. We take things day by day. Some bands get stars in their eyes. We are a basement band trying to kick ass."

On the subject of the negative or positive effects of social Media, Knight stated;

"We use social media. You have to. I think that live streaming video is the way to go. It seems that it's just easier to do. Nobody wants to go to shows. They click "going" on face book, but never show up. So it is good and bad. We use it. On one of the online radio stations they put one of our songs up against Judas Priest and had callers tell them which song they liked better. we actually won. That's saying something. I heard that Rob Halford actually wants a rematch."

How soon do your songs come together?

"Usually we have the parts together. The drummer might have an idea. we throw ideas around. Sometimes I am inspired for lyrics, sometimes I'm not. I'm sure their are more energetic bands out there when it comes to writing. We are more like turtles. We play for the love of music.When you don't expect something, that is when something happens."

What is the craziest thing that has happened at a CROWN OF EARTH gig?

In New York this guy crawled out of an alley and wanted to bite us on the neck."

"To Make us vampires."

Any festival in the world which one would CROWN OF EARTH like to play?

I was impressed by the honesty that Danny Knight expressed during our conversation. Integrity and honesty are rare finds in this business and Danny has both. Look for CROWN OF EARTH to kick your ass soon!