- May 30, 2017
CRY OF THE WOLF MAGAZINE Interview With Brian Blake from ETERNAL VOYAGER 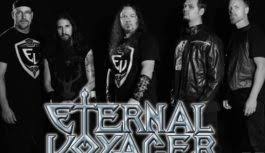 I listened to their 2014 release, "THE BATTLE OF ETERNITY", and was immediately impressed by this bands sound and lyric approach. This is American Power Metal in all its pure and powerful glory. You can tell the influences but EV spins it into their own form of metal. This is controlled rage and passion for the metal that exists within us all. You will find yourself headbanging and singing along.  I had the chance to talk with guitarist, songwriter Brian Blake about the upcoming release.

What is new for Eternal Voyager?

Working on the new album, Darkened Times.
This release will have better production. We are excited to get it out.We feel the songs are better.

You have opened for a good many bands. Do you get time to hang out with those musicians?

Not a whole time to talk. When we played with HAMMERFALL that was great.They actually watched our set from the side of the stage. So that was great. Really cool to have a band like that watching us.We learned a lot from other bands.But we also had to learn the hard way for ourselves. 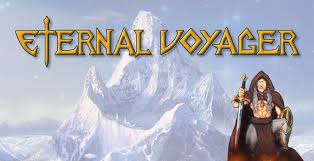 It's Great. I wouldn't be able to talk to fans in Germany if it wasn't for social media. It connects metal to the world. Nowadays it's all about social media. A great tool to use properly. Overall it is positive.

Any festival you would love to play?

Wacken, Keep It True, Masters Of Metal.But it's tough for bands to just travel and do a festival. No real money from labels for that.

Strangest thing you ever experienced on stage?

We were playing with UDO. This guy comes down from Minnesota. And he keeps yelling that fact in between songs. Every song, "hey I'm from Minnesota.  Our bass player drinks from a viking horn on stage and this guy kept calling him a leprechaun. Nice guy. It was all in fun. You have to treat musicians like people.

Eternal Voyager has a killer sound and a great work ethic. They are a non stop juggernaut of metal, steamrolling right into your brain. Do not miss your chance to see this band or to pick up a copy of their upcoming release, Darkened Times. And you can start with the epic:"the battle of eternity"
Head over to www.eternalvoyager.com now!