An Interview With Summoned Tide

Summoned Tide are a true metal band with a powerful and passion filled sound that will melt your face off. Hailing from Sweden, this is band is a power metal force to be reckoned with.  In a world of aging rock stars and metal cliches , Summoned Tide offers something fresh, young, and purely metal to the masses. They answered a few of my questions via social media. Check em out!


Rickard did. He wanted something that would sound wide and broad yet controlled and captivating.


Your influences are certainly steeped in traditional metal but what new metal bands also inspire you?


We listen to about everything from death to classic from all over the world. Music is such a wonderful thing and different people from different countries got their own specialties which inspire us in some way. Some direct examples are bands like Galnyreus and Angra. They're not particularly new but we found them quite recently and making the experience new to us.


How often do you jam together and who does most of the writing?


It has been less frequently now when we moving fast forward with families and studies. Once a week at least. Rickard does all the writing. He lives and breathes music when he creates and can isolate himself for about a week or so concentrating on the right feel and text. He's very passionate about his own work. 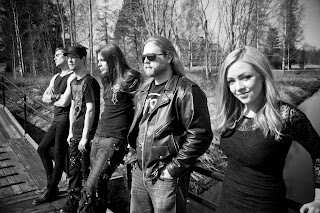 Do you feel that social media and in particular streaming services help or hurt a younger band?


In the purpose of finding new bands and artists internet is a great tool. We believe that the people themselves hurt younger bands when they rather stay at home, having a good time instead of venturing into new unexplored territorities with never-heard-before music and unknown artists that may or may not suck. Their time is way too valuable in today hectic life. Honor to the supports out there still enjoying the real deal instead of a MP3 from a shitty laptop.


As long as we can tour we'd be happy with anyone with the reasoning that we are doing it for the people and not ourselves. We rather see the crowd having a good time than surfing with a great band and directing the experience towards our enjoyment. Making the crowd happy makes us happy. But touring with a great band would very much enhance the experience for both parts. I won't deny that Iron Maiden is a dream, but bands like Sonata Arctica and Nightwish would be a pleasure.


What can we expect from a live performance?


On the song "omnipotent", how long did it take to write that? And do you play that one live?


I don't really remember how long it took for us to complete it, but we rehearsed it for over 2 years before its release. We play it now and then when we got more time on stage. Plan on playing in on our next gig in Georgia.


Vocally you really have a unique sound, is there anything special you to do to keep your voice in shape?


I don't drink much liquor, work out 5 times a week and do train my voice 30 mins a day. Can't stop singing when it's so much fun.


What are the future plans for summoned tide?


We plan on a new album that gets a delay every now and then. People sadly enough get busier when they grow up and with families in our lives we can't push the limits like we used to. We are almost done with it though; only the recording and mastering dates are not set yet. We also have something special that I won't say directly what it is, but it contains art.


craziest thing you have ever experienced onstage or backstage?


We had a black out on stage at a festival in Norway and when they finally fixed it they cut our stage time so we only got to play two songs. Traveling to another country to get smacked in the face by technical error. Craziest shit ever.


Lastly, anything you want to say to your fans?


Your support keeps us getting through. And keep supporting your favorite bands out there. That is what is keeping the live music alive.


Social media is our home on the WEB!