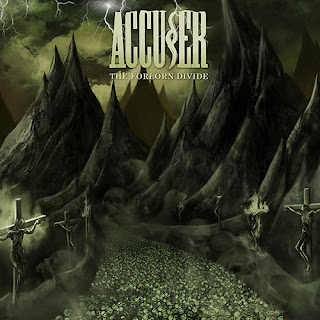 
1. What sets The Forlorn Divide apart from your previous albums?

Dennis: We definitely tried to push things in a new direction with this album. Accuser has been a very dynamic band from the beginning, always looking for ways to move forward trying new things. It felt right to approach this record with the same mentality and so we decided to evolve our sound by combining the modern thrash style of the recent Accuser releases with the technical and more complex elements from the old-school "Who Dominates Who" days. It's also the first Accuser album in 26 years that features solos from both guitarists :)

2. What inspired the lyrics for the new album?

Dennis: At the base level, all the lyrical themes on this album come from some sort of real life experience or a memorable thought or idea. Once a "seed" for a song lyric appears, we try to imagine how it could develop and create a what-if scenario based on this initial impulse. The title of this album, The Forlorn Divide, also gave us a clear direction for the lyrical content. Every song deals with the human mind and its darkest recesses, represented by the titular mountain range, and we tried to approach this general idea from many different angles in order to cover a good amount of ground.

3. 30 years in this business. What is the most memorable event for the band that stands out for you?

Frank: I fondly remember meeting Lemmy. He was such a great guy. Of course I also love meeting other musicians who I've only known for their music. It's always surprising when you compare the actual person to the image you've created of them in your head. Other than that, all the amazing festivals we've played definitely stick out in my mind as well and I'm sure there'll be a lot more to come. 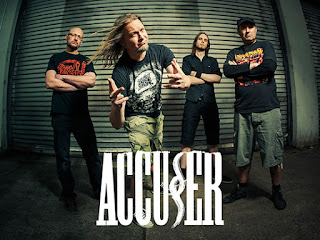 4. When can we expect to catch Accuser on tour this year?

Frank: There're still a lot of things we're planning right now so it's difficult to have a definite answer at the moment. We'll definitely be playing quite a few festivals this summer.

5. How does the metal scene look now as opposed to 30 years ago?

Frank: The scene itself didn't really change, it just encompasses a much bigger age spectrum compared to 30 years ago. A lot of external factors have changed though: organizational aspects, audio formats, technology in general, etc. In the past, people had to rely on word of mouth and you had to actively go out looking for music. Today everything's literally at your fingertips. The whole excitement around listening to and collecting music has faded a bit.

6. Do you see social media as a positive or negative for bands?

Dennis: Social media is a very positive thing for bands today in my opinion. It's a great way of finding an audience or even letting an audience find you regardless of any geographical barriers that may have prevented effective word of mouth in the past. Without the internet and social media the metal landscape wouldn't have become as diverse as it is today.

7. The guitar work on this album is fantastic. Can you describe the writing process for this album?

Dennis: Glad to hear that you're enjoying it. It usually started with either Frank Thoms or myself writing and recording a full demo track at home and sharing it with the other guys. They then gave their feedback and we changed the song based on their suggestions. After everyone was satisfied with the general framework and structure, we started rehearsing it at which point the song got more and more refined especially in terms of drumming. When we entered the studio, most of the album was already fully planned out so we had more time to really flesh out the details and maybe make some last minute changes here and there. Our solos we both wrote while in the studio shortly before recording them which worked out pretty nicely I think. My approach was very deliberate and carefully constructed whereas Frank went with a more feel-oriented improvisational style. Having two distinct solo guitars creates a great dynamic and brings even more variety to the whole record in my opinion.

8. Who decided the cover artwork?

Dennis: The idea for the cover we all developed together. Early on we discussed a few different ideas but we quickly and unanimously decided on having an ominous, mountainous landscape on the cover as a visual representation of the album title.

9. Do you think creating musical compositions based on examinations of negative things, like the human mind or experience, allows the listener to become stronger? In other words, do you view your music as sort of a therapy for people?

Frank: I try to share my own personal thoughts with other people through our music. I know that I can't reach everyone because the lyrics don't always get a lot of attention. Still, I continue using this medium and if someone out there can identify with my lyrics then that's terrific thing.

10. Lastly, anything you would want your fans to know about the future of Accuser?

Frank: We're very happy about the release of "The Forlorn Divide" and we're looking forward to the festival season this year. After that's done, we'll be spending some time writing new material again which will be exciting and as always, different. We've got a lot of things in store for the future so look forward to that and thank you very much for your support and for checking us out. Cheers!