Dave Meniketti has seen and done it all. A  true guitar icon, his band Y&T, has been a nonstop juggernaut of rock and roll. For over 40 years they have criss crossed the world delivering such songs as "Forever", "Meanstreak," and the celebrated "summertime Girls". I had the chance to speak with Dave on his career, highlights and the legacy of Y&T's music

Y&T celebrates 40 years. What are your thoughts on the longevity of the band?


Pretty amazing. Who knew. We just go out there and play music. All of a sudden here we are and it's 40 years later. It's really kind of shocking to me. I don't feel like the kind of guy who has been at the same job for 40 years. I guess that is the good thing about the gig.


Who were your influences growing up?


Hendrix was certainly one of them. I actually got a chance to see him play before he died. That kind of freaks people out because they go "You saw Hendrix play". (laughs) I listen to all kinds of music. Leslie West. Duane Almond, Dickie Betts, Jeff Beck. There are so many of them. I never tried to copy them it just sort of works into you 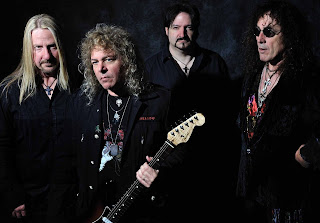 Any band you would love to record with if you had a chance.


Not really sure. Not off the top of my head.  a lot of bands I do admire. Most my voice probably wouldn't go with.


What is the craziest thing you ever experienced on the road?


Well it does happen all the time. So many. A cool thing, when we toured with AC/DC in the 70's. Bon Scott asked to drive in our little van because he wanted to party and at that time he claimed AC/DC was boring. They didn't want to party and he did. So he rode with us through Texas and when we stopped for gas he would run in and buy alcohol. That was a fun moment in our career. I wish I could have enjoyed the moment more as it happened. Especially when you think of how early he died. Those guys were still relatively unknown at the time.


One of my least favorite things to do. I choose the songs. We try to craft the set do it ebbs and flows right. We don't want to bore anyone. We always want to play more stuff than we can fit in it. When we go back to the same club year after year we try to change up the set list. I have every list from the last ten years on my computer. So when we are on the road we can keep it fresh.


Are you active on social media?


Not so active. I just don't have the time to spend on it. I just don't really bother with it. Sometimes I respond on our forum on our web site. Too many avenues. I'm too busy to really get involved. I like to live in the moment and get out and enjoy life.


O.K. So let's talk guitars. Straight into the amp or a pedal guy?


I'm a straight amp kind of guy. I used some pedals for a little vibe onstage. But from the 70's through the 90's it was all handled by the house guy. For the most part I didn't control it. Eventually I used the pedals to help control. No rack. Chorus, delay, bare bones. Tube amps. Marshalls for most of my career until the mid 90's.


40 years. Is it difficult to come up with new material?


Generally we just write in the moment. We have some riffs on tape but we usually don't listen to them. Sometimes when you get in a rut you can go back. But as you write if things are flowing then you don't want to go backwards. Keep moving forward.

Did you know when you wrote "Summertime Girls" that it would be such a hit?


Well you know what... that song.  A typical rehearsal for us. No one gets there at the same time. No pressure. Everyone gets there when they can sort of thing. So we were there with Joey and he starts noodling over my chord pattern I was messing with. We just stopped and looked at each other and said "That's cool". So by the end of the rehearsal we had the song basically down. It doesn't happen all the time but the song was written in a few hours. We thought it was kind of commercial. The record company wanted another single. We finished the song. It just happened. We liked it. But the record company initially told us "what the hell was that crap". A couple of years later we recorded it for the live album as an extra track. Just because we thought it was a good song. The label reps heard it and they loved it. They told us to record it right away. Everyone at the time was looking for a hit. We just liked the song. We thought it had a nice, fun melody.


Any advice for aspiring musicians?


The main thing to keep in your head. Just keep remembering sometimes you make better decisions if you just step back and go with what your gut is telling you. Always go with your gut. Go with what feels right. Try to just feel what you are doing. Don't just copy other peoples licks. Create you r own vibe. So when you're playing they can tell it's you playing.