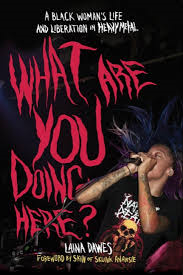 “What Are You Doing Here”?  A Black Woman's Life And Liberation in Heavy Metal,by Laina Dawes, Bazillion Points Books

This was an interesting interview. Many of us have never given much thought to what it must be like to be a minority that loves heavy metal. For most of us the idea of race as an issue simply doesn’t come into play. But there are always those people who judge skin color over character. Now add into that stereotype a female minority and you have people turning their heads. This is the world that Laina Dawes found herself. Growing up as a metal outcast is one thing, surviving in a brutally real racial and gender divide is another. This book is her wake up call. It is our wake up call as well.  It screams at you the reader to change your perceptions. It is an honest and solitary journey that reveals itself in the end to be the story of us all. I found Laina to be down to earth, friendly and fiercely proud of her heritage and pure love of the heavy metal genre.


When did you decide to write this book?

Actually the original idea was to do a documentary. I was always fascinated by the visual of black women performing metal,hardcore,and punk. However I had a hard time getting support to do a documentary film based on that. I published an essay in 2007 on music criticism. Ian from Bazillion Points contacted me afterwards and asked if I would consider writing a book. So I thought that would be easier than waiting to do the documentary.

Was it hard to get people to talk with you?

Yes it was. I spent the first six months doing research. Just to see if I could find enough content. My white male journalist colleagues helped spread the word for interviews.


Do you feel that the book has helped to raise awareness and change perceptions?

I’m extremely surprised and pleased by how well it was taken.  I didn’t expect it.  I’ve gotten a lot of people who are contacting me who really felt alone. They felt so alienated in the scene. Women musicians who are also happy that their story is being told. This has also really helped black female bands in terms of their ethnicity, to gain exposure. There are some really good bands out there.

Is it easier to be accepted in 2014 as a female musician?

Still a struggle across the board regardless of ethnicity. You are seeing a lot of female fronted bands right now. However there is a long way to go. People who are really into metal only really care about the performance. So in general the people that matter don’t really care. But there still is a lot of resistance to the idea. There is still the thing that black women or black people are not marketable. There is still a long way to go. Your seeing more black male metal performers getting signed. But not so much for women.

Do you think reaching out to students will help change perceptions?

Yes. I have done a lot of speaking engagements. There is a cool demographic that’s interested in gender and culture studies. There is an interest in change. Thank goodness it’s not just about the music.

Yes. Working on it. I would like to take it a step further.

One last thing. Judas Priest. I know you are a Judas Priest fan. What album would you have to have if you were ever stranded on a deserted island?

Sad Wings of destiny. The first album I got was Screaming for vengeance but Sad wings is still the one.

You can order this book from www.Bazilionpoints.com