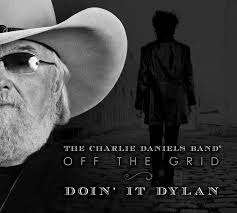 Off The Grid...Doing it Dylan
The Charlie Daniels band

Charlie Daniels has an enduring legacy that is iconic in the american music pantheon. Now his musical attention has turned to Bob Dylan. His latest album is a tribute to some of Dylan’s classic songs like,.....
“Tangled Up In Blue”, “ I Shall Be Released”, and “ Mr. Tambourine Man”.

As you would expect this is some serious music making. The energy he commands is unprecedented. Powerful renditions of These songs as only charlie daniels could produce. Dylan’s legacy is a monument to a lifetime of classic american folklorish storytelling. His is the lyrical dream of backroad americana, a thought in lyrical digestion tangled up in the histrionics and the very soul of who we are collectively. Daniels takes his songs and brings them back home with his soulful country flavoring. Who better to cover the great master than the architect of modern southern country rock and roll.

Each track is a brutally honest tip of the country hat to Dylan. Dylan may be spending his time welding intricate metal fencing nowadays. Embracing the steel of the heartland as it were, but Charlie and the boys have breathed new life into timeless Dylan classics. 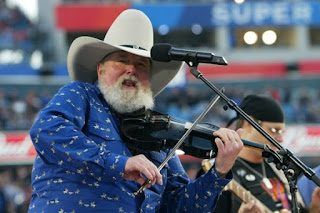 “Tangled Up In Blue” in particular is a very moving rendition. WIth a man and an artist like Dylan you have to be careful not to tread on the original idea and emotions. His is the anti-hero sentiment, the outsider accepted by all except his inner voice. His mind is a flowing register of poetic commencement speeches ont he fabric of our American lives. Charlie Daniels has tapped into his mind. He performs the songs in his own style but he is acutely aware of what the legacy of Dylan means to his die hard fans. Do it right and you are applauded. Do Dylan wrong and his fans fall on you like a hard rain.

You can always expect a good solid album from both Dylan and Daniels but here the combo of his songs in Charlie’s hands is nothing short of magical.