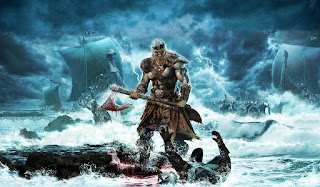 Arriving to shores around the world soon, the newest viking metal onslaught from Amon Amarth, Jomsviking, is a battleaxe of battering tunes.
Epic in scale like a viking charge, and yet clearly there is a tempered method to their steel. Amon Amarth is hands down one of the biggest and best flag bearers for the viking metal genre. Raise your cups of mead and shout skol!! 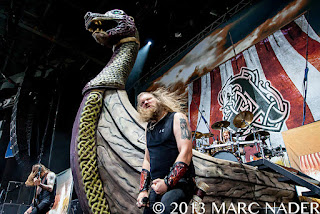 For make no mistake “Jomsviking” is an epic album full of tales of blood and brotherhood. Tracks like “First Kill”, and “wanderer” split open your skull like a viking axe. But it is clear to all that “On a sea Of Blood” is the standard by which all other members of the genre will judge themselves. This song has it all.

Other stand out tracks include “At Dawns light”, “One Thousand Burning Arrows”, and “A Dream That Cannot Be”. But it is on the epic 7 plus minute song that Amon Amarth truly begin to show a certain level of mastery over their domain. 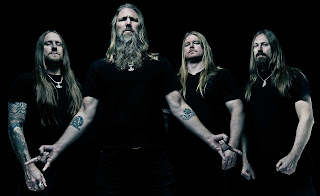 From the press release:
"It's a pretty simple story where a young man is in love with a girl but unfortunately she's being married off. He accidentally kills a man when this happens and he has to flee," the frontman explains. "But he swears to have revenge and win her back. He can't let go of the past. He feels that he's been wronged and his life has been destroyed. The story of the Jomsviking is the background - it's the way he finds to go back and claim his revenge. The way the story evolves is not a happy story… it's a tragedy, I guess! But I like sad endings, because they're the ones that affect you the most."


"We just want to be more,"Mikkonen concludes. "Bigger shows, more production, everything bigger and better. I'm pretty sure it's gonna be that way too. There's a very good vibe in the band and I think it's gonna be one hell of a year." 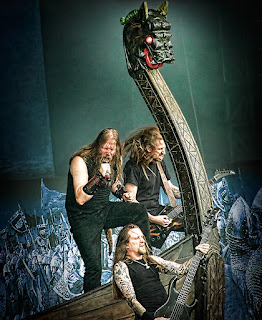 "The shows are always absolutely fantastic," Hegg enthuses."When you're onstage, performing, whether it's a festival or a club, and you have that connection with people and you feel that reaction to all the hard work you've put in, that's when you know that all the hardships you've experienced over the years were worth it. We are still growing. We grew with each album and we were never a trend. We've never followed trends and no trend has ever followed us. We're on our own. We do what we love. There are so many shows planned in 2016 that it's almost insane, but that's what we live for."