An Interview with Michael Hellström - ELVENSTORM 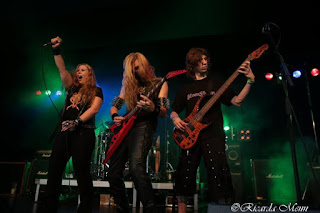 
Elvenstorm is a superior power metal band with incredible vocal harmony and that full on guitar assault that sounds so good cranked up! I had the chance to Interview Michael Hellstrom, guitarist for the band. His insight into the next phase of the metal evolution of Elvenstorm proved to be full of information. This is not a band to be missed as 2016 approaches. all the elements of a classic power metal band are here.

Tell me about the writing for the album soulreaper. How long does it take to pull songs together?

Shortly after the release of our second album “Blood Leads to Glory”,  we worked immediately on new songs and decided to record a 4 tracks E.P. It’s a kind of “first taste” of what the next album will be. We also decided to pay tribute to two different bands, Slayer and Heavens Gate, and we recorded these songs in the Elvenstorm blood.

Who does most of the writing?

Most of time, we are writing songs together with Laura.
We worked like that since the very early days of the band and I think it’s a very good alchemy.

Where do you see the state of metal in ten years? 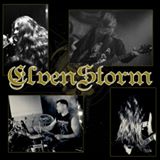 I think Heavy Metal will never die, as long as there’s still new generations of young metalhead and young talented bands that bring Metal as it’s highest level and not like a trend.
In 10 years people will still listen to legends such like Iron Maiden, Judas Priest, Running Wild …
and I’m pretty sure that bands like Enforcer, Portrait or Evil Invaders will become more and more popular.


Are you fans of social media?

Honestly not that much,  I prefer to meet people for real and share some beers and hang out with them !
But this is one of the best way to promote a band nowadays because you can make some easy and free promotion.
The dark side is that with all those social medias, anyone can say anything, There’s not much respect and privacy, anyone can call himself  music journalist or promoter or manager….
But it’s also a good way to interact with the fans and friends, so there’s also good side.


How is the support for the band in your home city? 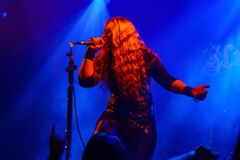 This is quite strange, because Grenoble has a good scene, with Lonewolf, Sanctuaire and other talented bands, but we don’t have a real fanbase there, and we still never play there !!!
To catch gigs nowadays is a real fight, even in our home town . You have to be friends with promoters or to pay to play.
For Elvenstorm we will never prostitute our band and our music only to catch gigs,


Take us through a typical rehearsal. Is there a format or is it just lets get together and perform?


There’s no real format, we choose the songs we’ll play at the next gig, work it by our side and then we rehearse the show all together. Not more, not less. 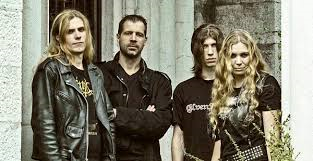 How do you know when your song is complete?

For me, a song is complete when I’m 100% satisfied with it.
When I feel the heart of the song and all the feelings I wanted to put inside, I can say this is complete. Then it’s a matter of arrangements that will be worked in studio


Who came up with the name?


Laura and myself  came up with the name.
We started the band together and we wanted something to sound melodic and powerful  that’s why we choose Elvenstorm


What bands inspired you and what bands are you currently  listening to?


I’m really influenced by the 80’s and 90’s German scene with bands such like RUNNING WILD, early HELLOWEEN, but also STORMWARRIOR, PARAGON, GRAVE DIGGER  and of course bands like IRON MAIDEN, JUDAS PRIEST, SAVAGE GRACE, . I’m also influenced for my guitar works by some more obscure bands like BATHORY, DISSECTION, or WATAIN.
Actually I’m listening a lot to “Iron Maiden – The Book of Souls”, “Running Wild – Gates to Purgatory” and “Enforcer – From Beyond”


Craziest thing that has happened at a gig.

So far, there’s not much crazy things that happened to our gigs .
But one of my best memories is when Marta Gabriel from Crystal Viper, jumped on stage with us to sing “Mistress From Hell” in Belgium. It was amazing and impressive.


What is your favorite song to play live?
Hard question !!!!!


I would say “Sworn to the Dark” and “Legions of Steel”


If you could jam with any musician long since past which one would it be and why?


Without any hesitation I would say Rolf Kasparek from Running Wild and Kai Hansen from Gamma Ray.
This is because of them that I’m actually guitarist.
They bring me so much with their songs and albums, that it’s more than music for me.
An album like “Walls of Jericho” or “Under Jolly Roger”  has so much impact on me. These guys are idols for me


How can fans get your cds?

They can get our cds and merchandising through our online storm: www.elvenstorm.bigcartel.com or through Inferno Records mail order


What do you want people to know about your upcoming release?


We are actually working hard on the upcoming album and ¾ of the demos are already recorded.
It will be the most powerful album we ever recorded, it will also be the darkest and the most ambitious one. We are working a lot on arrangements, melodies, vocal lines, guitar lines ….
We are actually really satisfied with those new songs and we can’t wait to hit the recording studio.
Expect a speed fast heavy metal mayhem for 2016.


Any words for your fans

Just want to thank  them for all their true and faithful support.
I hope we’ll be able  to hang out with all of you on the road.
Without you there will be no Elvenstorm.