Interview with The Harp Twins


The Harp Twins  know how to rock! They have played for heads of state and celebrities around the country. But they are true music fans as well as fans of metal! They  perform a variety of Television theme songs as well as covers by such notable classic metal acts like, Iron Maiden, Ozzy, And even AC/DC. Not only does their music sound amazing but their videos are equally fantastic, visual representations, of their passion.


1. Your cover of Iron Maiden's "Fear Of The Dark" is excellent. It is what led me


to discover your music. Are there any plans to do more Maiden songs?

Thanks so much! “Fear of the Dark” is our favorite Maiden song and we had a


ton of fun covering it! We also recently posted a video for our arrangement of


“Dance of Death” – which was our most elaborate music video to date! We have


gotten a lot of requests to cover more Iron Maiden, so you can definitely expect


more in the future. We have yet another Maiden song on our “to arrange” list that


we think our fans will love.

2. Obviously the two of you are fans of metal music as well as other forms. Name

That’s really difficult, because we have a lot of favorite songs from a lot of


different groups. However, some metal acts that make the top of our current list

3. Are there any bands that you would like to record with? And perhaps perform

Oh goodness, yes! It would be a huge honor to play with any of the bands and

4. The current wave of metal bands from Europe are Symphonic and female


fronted. Do you ever see The Harp Twins perhaps fronting your own symphonic


metal bands! It would be fun to perform with a rock or metal band some day, and


being able to rock out with a band backing us would be a dream come true. :) :) 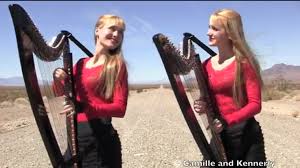 5. Playing for presidents and people from all manner of life, do you have any


crazy stories that may have happened backstage or during a show?


show is different. When we’ve played for huge political events, our harps have


always been “swept” by the Secret Service. It was amusing to see the dogs


sniffing around our harps and equipment. One time a few years ago, we were


communion. She and the harp were almost knocked over and there were


communion wafers all over the floor and us. Luckily, we didn’t miss a beat and


the pastor was fine. However, thankfully we haven’t had anything too crazy ever


6. The Harp seems a little out of reach for the average student in school. Do you


think The Harp Twins could help to change this? Maybe tour some schools to


to not think outside of the box. Since there are so many people that play the


piano, or violin, or guitar, people can see the potential of those instruments. We


instrument. In fact, we recently partnered with Harpsicle Harps to show what can


be done with small, affordable harps. Our most recently video is our arrangement


of Ozzy Osbourne’s “Crazy Train”, which we arranged specially for our Harpsicle


Harps! (https://www.youtube.com/watch?v=BR2RVaXKQiE) When we first


wanted to learn the harp in middle school, we worked a lot of jobs to earn money


for our instruments and lessons. We had to show our mom that we were serious


about learning the harp. We didn’t have a lot of money, but we didn’t let anything


stop us from following our dreams. We didn’t believe (and still don’t believe) that


pursue their dreams. We’ve played for quite a few schools for kids of all ages and


that is always a lot of fun! It is awesome to see the reactions of kids to what we


can do with our harps. We definitely think our music is starting to reach a new


audience and we would love to inspire a new generation of musicians. We love


taking the harp where it has never been before!

7. Future plans for The Harp Twins

We’re not sure what the future holds, but world domination by the Harp Twins


Revolution is a definite possibility. ;) ;) We would love to continue to perform on


our harps and act. We love traveling, so we hope our work will allow us to see


the world. The future is full of exciting possibilities and we can’t wait to see what


life has in store.

8. Although twins, each of you has your own unique personality. Name


something about each other that people might never guess...


C: Kennerly can whistle and I can’t whistle worth beans. It seems like I should be


able to since we are the same genetically!


9. Anything you would like to say to your fans.

Our fans are the BEST and we wouldn’t be where we are today without them!


and every person who supports our music and us. We try to show that

That's about it. I know you are busy so take your time. Personally I think your


music and versions of classic covers are excellent. Keep up the fantastic music

Thank you so much for your interest in our Duet Harp Revolution! We would love


to connect with your readers on our