Andrew Santagata has been a mainstay in the Rhode Island music community for years. His music is ever evolving and always fresh. I sent a few questions his way via email regarding his music, his latest album, and a lifetime of pure dedication to his art form.


1. Your musical career spans over 15 years. What are some of the highlights for you? Any regrets?

Any regrets, no... But some highlights have been getting to share the stage with some of my favorite bands, including, Alice Cooper, Heaven And Hell (Sabbath with Dio), Queensryche, Buckcherry, Sevendust, Tesla, Dope, Powerman 5000, Kittie, Alice In Chains, Shinedown, Disturbed, Godsmack, Skid Row, Quiet Riot, Enuff Z Nuff, White Lion and many many more. Lots of highlights! One of the coolest was getting to be a part of the Locobazooka Concert Film/Movie, was filmed in Fitchburg MA back in 2004 in front of over 20,000 ppl and I got to play the main stage, prime time, was mad crazy, and to be in a movie with Shinedown, Kittie, Monster Magnet, Saliva, ect, was real cool!! Good times!

2. Your new lineup is doing well, what are the future plans for santagata?

Future plans for Santagata.. Well, first off, we are hoping to release the new CD "Jet Black" late this year, early next year, 10 all new original songs from Santagata! The first single and title track has already been released. After that, it's just shows, shows, and more live shows to promote the new CD!! 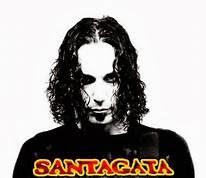 3.If you could put together your own rock festival, which top 5 bands would you bring in? Any local bands?

I don't know about which bands I'd bring in, but I'd love to play with KISS!!! Big influence!! always wanted to sing like Paul Stanley and play lead guitar like Ace Frehley!! Kiss rulz!

4.How do you see the local scene doing here in Rhode Island?

Well.. The scene is what it is... Hard work and good songs will prevail... I hope!! Things come and go out of style, I think the best thing to do is just do your own thing and not worry about what the other bands are doing, be yourself, no need to follow the leader, ya know...The scene will weed out the weak and the strong will survive!!! This is my 20th anniversary of releasing my first single "Dead Man Walkin", who would think 20 yrs later I'd still be around, making CD's and playing shows, but I am and I'm glad to do so! Any day above ground is a good day I say, let's rawk!!!

5.So many bands have come and gone over the years. What do you attribute to your longevity?

I think what has kept me around all these years is the love of doing it.. Weather I make it or not, doesn't matter to me, I do it for the love of making music and if I'm alive at 60, you will see me somewhere in some coffee house playing acoustic and singing my heart out! .. 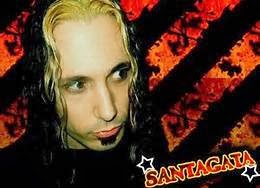 I think longevity comes from determination. When everyone around me was throwing in the towel and giving up on the band thing, I was going to have NO part in that, I said to myself that, no matter what, I was going to play till I wanted to stop, whenever that is. No girlfriend, job or any other kind of responsibilities were gonna tear my music away from me or me away from it, period.

I see friends who are musicians, telling me that they think it's time to stop or whatever, that they don't have the time they used to have to make music or play in a band or whatever... Well, I have 3 kids, a house w/ a mortgage, a girlfriend, job and a ton of responsibilities and I still find time to play in my band and make new music year after year, no excuses... and I'm going to keep making music til the day I die, period.

6. Finally, where can fans pick up or download your music?

All of Santagata's music can be downloaded for FREE @ www.reverbnation.com/santagata